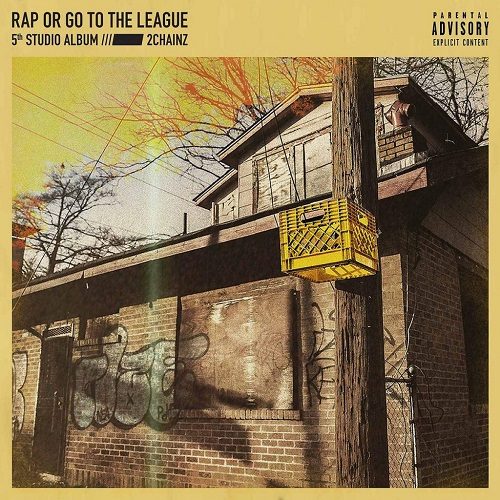 As the decade winds down, few rap artists have been able to make themselves indispensable to the industry to the degree Tauheed Epps has in the past ten years, basically from the day he shed his erstwhile moniker associated with his membership in duo Playaz Circle and became 2 Chainz. The artistic – and commercial – value he added as a guest star was often not immediately apparent, especially to songs from higher hierarchy artists. There was a time when 2 Chainz was a sort of running gag of rap music, an artifact representing an ancient rap attitude in modern mainstream rap and trap, a sort of primitive version of prime Lil Wayne, a court jester and a joker card who would typically validate his guest appearances with over-the-top cracks.

In the meantime, or rather in retrospective, estimation of 2 Chainz has grown, certainly because the lyrical rubble he banked up contains its share of nuggets, probably because more mature considerations began to seep into his overall thought process, and perhaps also because any sort of consensus artist is hard enough to come by in these divisive times. In short, the foundation of 2 Chainz’ success extends beyond Atlanta’s market dominance and personal networking abilities. The man has personality, and he combines familiar characteristics in a fairly original package. He’s an ATLien and a Trap God at the same time and has a little bit of both Weezy and Jeezy in him.

2 Chainz’ fifth regular album is not a purely exploitative reflection of the artist’s experiences but an attempt to connect his own past with the present of today’s young men. “Forgiven”, beginning with a foreboding “When your dreams turn to nightmares”, recalls an adolescence spent on the court and before the court (“I pleaded with the judge, this my first offense / High school b-ball, I’m tryina get a scholarship”), before he dedicates the song to young men who didn’t get to make such life-defining decisions because they fell victim to violence. The emotional opener has a number of extras that render it especially effective. The Dem Jointz-produced track boasts flutes and church choir vocals, Marsha Ambrosius, a clip of young Tauheed being announced in the starting lineup for the North Clayton Eagles, scratched Jay-Z vocals and a closing spoken word performance. There’s not much more you could demand from serious rap music.

After raising the bar to this level of ambition, 2 Chainz leaves it there for “Threat 2 Society”, his well measured words ringing with honesty over a 9th Wonder beat saturated with soul:

“You niggas cryin’ over spilled milk
Probably never seen your friend killed
probably never seen your dad die
or played dodgeball with fed time
I’ve done some things I ain’t proud of
Like sold my mom drugs
The devil put some toxin in me
Demons tryina have a auction in me
They wanna sell my soul
Goin’ once, goin’ twice – never sold
Best story that was never told
Keep in mind that I have several episodes
A lotta things to be thankful for
A wife and three kids, I might make it four
Never get the credit I deserve
I don’t know if you hearin’ every word?”

Wondering aloud if people are listening at all actually constitutes a vintage rap moment. If you do happen to listen to what 2 Chainz has to say, you’ll come across some elemental rap ingredients. The way he seemingly embraces the ‘menace to society’ defamation. When he portrays himself as supplier to the stars some fifteen years back on “Statute of Limitations”. At times Devin the Dude seems to peek from out of “I’m Not Crazy Life Is”. And you almost expect Scarface to make an appearance on the classy sounding “Sam”, which of course is owed to producer B. Clark borrowing from UGK’s “Hi Life”, which was co-produced by N.O. Joe.

2 Chainz’ parlance and philosophy are rooted in American rap history. He enlists Pharrell for a throwback to Atlanta’s breakout sound coined by Mr. ColliPark and company (“Momma I Hit a Lick” featuring Kendrick Lamar). He has DJ Mustard and Terrace Martin put together a Bay Area-type beat for “2 Dollar Bill” and the irrepressible E-40 and Lil Wayne. There’s also room for R&B, via the smooth ’90s vibe Ty Dolla $ign dwells on on “Girls Best Friend”, or the duet with Ariana Grande, “Rule the World”, which lifts its melody from an Amerie song.

Yet the more references, influences and guest stars merge in music, the harder to attain is true originality. You have to pay attention to catch the leading man’s contribution to “High Top Versace” across Young Thug’s repeated amazement about how success came so fast (which after thousands of songs expressing the same notion isn’t quite so stunning anymore, especially to those of us unaffected by windfall). Wondagurl & Mike Dean team up only for “Whip” to sound like a Travis Scott track, who happens to be featured.

While 2 Chainz’ personal timeline can at times be confusing, the album sequencing does mostly make sense. Buddah Bless & Jabz make “Money in the Way” meet the preceding 9th Wonder track with a natural, horn-driven sound while the rapper unpacks the arrogant/ignorant flow that made him famous. Always providing potent instrumentals, Da Honorable C.N.O.T.E. produces “NCAA”, the album’s most artistic (but also mostly abstract) connection to b-ball (“We the young and dangerous, we be ballin’ hard”). “Rap or Go to the League” reaches a serene conclusion with “I Said Me”, a nuanced profile of the person behind 2 Chainz that is also part confession, “I’m Not Crazy Life Is” and “Sam”.

One hit-wonders are always a possibility in rap and pop. Longer lifespans are not that easy to achieve for artists after they had (or may not have had) that one hit. 2 Chainz made it possible for himself and has every right to declare himself “rare like a 2-dollar bill” in the company of Lil Wayne and E-40. His artistic ambition still lags behind profit objective and pursuit of happiness, but he also manages to be the kind of wordsmith that doesn’t have to spell everything out for you. But when he does, he gives a fairly balanced overview of the subject, see his thoughts on taxes in “Sam”. There’s still a cunning street edge to Chainz twelve years after “Supply & Demand”. When he lectures fellow affluent residents of his tax bracket, “Yeah, you rich but your talk is cheap”, it pretty much sums up what makes 2 Chainz so effective.