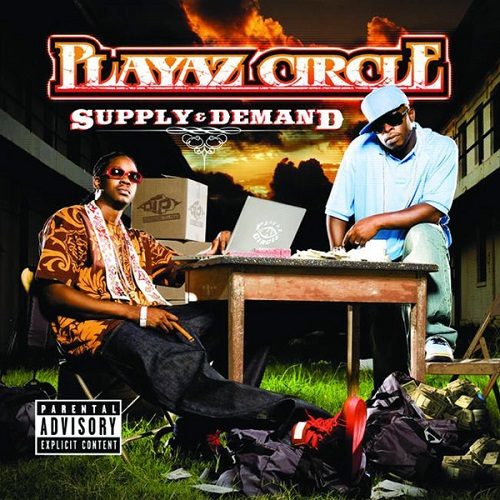 Try as he may, Ludacris has never been able to craft a successful artist. His DTP Records has put out record after record, none which has sold any significant units. Ludacris’ clout has been used well to get each act a monster beat for the single. Shawna had “Getting Some.” Field Mob got “Georgia” and “So What.” Even the compilation got Scarface to lace a classic on “Growing Pains.” I can’t tell you what the problem is. All I know is that Playaz Circle is Luda’s latest attempt to show he can scout talent and they too have a monster single. “Duffle Bag Boy” has been playing on an hourly basis, at least here in Texas, and I’m not complaining. The fat organs and rolling snares exemplify all that I love about southern music. Of course, groups need more than one single to establish themselves and on “Supply & Demand” the duo of Titty Boi and Dolla add ten more tracks for mixed results.

The main issue for Playaz Circle is that Titty Boi and Dolla aren’t the best rappers. You really wouldn’t expect complex rap from two guys who took their name from the strip club, but Titty Boi’s lyrics are unacceptable at times:

“Jealousy moving the world I get another felony
I’m losing my girl, that’s what the judge keeps telling me
I hang around like the letter D
I’m with whatever B, You see I’m something that you’ve never seen
Dear Mr. LA Reid Duffle Bag is just a seed
I hope you see our vision, there is no competition
If I wanna battle someone I look in the mirror
And I go at my self, I gotta back myself
I gotta bag Janet and help Mr. B
You know I’m down with key and god is my referee
In this game that I’m playing who’s next but me?
See my future looks as bright as a tangerine
You should have seen where I came from, It’s not the same song
Dirty dishes in the bedroom, Thirty Sixes in the bedroom
Dirty bitches in the bedroom
Should I continue?”

NO! You should have stopped right there Titty Boi, but instead we get more mind-boggling lines from the man after he rhymes bedroom with bedroom with bedroom. The astonishing thing for me is despite dropping some of the wackest lines I’ve ever heard, Playaz Circle still maintains my attention. Part of it is the fact that even during their wackest verses you see glimpses of talent, but the biggest reason you’ll still listen to Playaz Circle despite their shortcomings is the pounding music. “#1 Trap Pick” hits us with loud marching band horns, high pitched synths, and bass that’ll knock your trunk open. “We Workin” and “Paint Still Wet” feature equally pounding tracks and are sure to be truck knockers. “Paper Chaser” finds Mr. Porter giving us a smooth beat that would make 9th Wonder jealous. Incidentally Phonte is listed as providing additional vocals on this one, how’s that for unexpected? Despite being a group geared towards the street anthems, Playaz Circle do come tight on a few heartfelt jams, the best being “Let It Fly:”

I’ve been hurt but I don’t hold no grudge
At least I can say I been loved
And then we live, and then we die
Sometimes we fall, and then we fly
Lord let me fly

Though these words came from Dolla, the more talented half of the duo, Titty Boi still comes correct on the track. This sharp contrast might lead to frustration for some as it is obvious that Titty Boi and Dolla can be better rappers if they chose to be. Whether it be laziness or not wanting to shoot over the head of their target audience, Playaz Circle sounds like they dumb it down at times.

For better or worse, Playaz Circle will probably be the most successful and marketable act Ludacris has put out. This comes from a diehard Field Mob fan who thinks that group is highly underrated. “Supply & Demand” definitely lives up to its title as the duo gives southern fans exactly what they’re craving – nothing more, nothing less. Every beat on this 11 track CD knocks hard and is exactly what the targeted audience expects. Despite their lyrical shortcomings, the crew comes through with some catchy hooks that are sure to catch on. Even the crew’s lyricism can’t be knocked too hard as I see vast potential and possible hidden talent in Titty Boi and Dolla. At worst, Titty Boi and Dolla are your typical southern rappers with great beats. The other side of the spectrum is wide open. Not a bad assessment for both Playaz Circle or Ludacris.