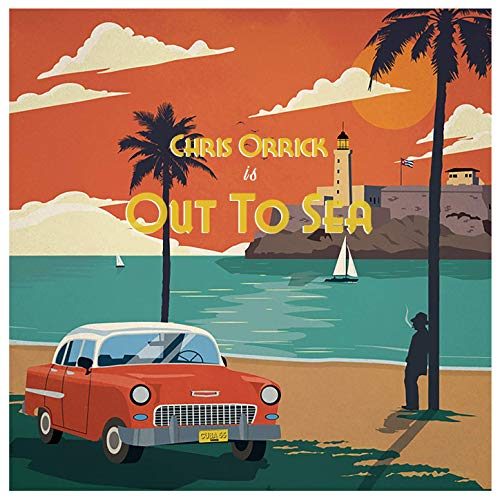 Chris Orrick :: Out to Sea

Michigan rapper Chris Orrick (formerly Red Pill, until that term got associated with jerks on the internet) has made a career out of being a self-hating drunk. Since his 2015 debut, he’s been refining his musical approach, honing his skills as an MC, and perfecting his persona as Charles Bukowski by way of Slug from Atmosphere. “Out to Sea,” his fourth and latest album, further perfects his style.

Orrick has the right combination of mic skills, humor, and blunt honesty to make his repeated riffs on being a depressed alcoholic continually interesting. In addition to dealing with his own issues, he dedicates this album to “the damage done by the 2016 United States Presidential Election, Social Media and the 24 Hour News Cycle.” He takes a “laugh to keep from crying” approach on “Funny Things”, pointing out the absurdities in our culture:

He calls out the toxicity of online culture on “America Online”:

“All the world’s knowledge is sitting in our pockets
And there’s still people out there who don’t believe in fossils
Instagram models, playing Facebook Aristotle
For adoring apostles, I’ll rather play opossum
Most of my time spent online is feeling rotten
And I admit that I’m huge part of the problem
Arguing for nothing, braggadocio and ratios
I’m just gonna hang out with Pistachio”

One of the best tracks on the album is “Liquor Store Hustle,” a day of the life of being a problem drinker. Over a woozy, off-kilter beat, Orrick manages to tell the story of getting wasted, ordering food, and watching TV all day in a way that is both funny and sad:

“Back home, driveway, breathing out relief
Cops – 0 Chris – 1, relish their defeat
Inside pour a drink, microwave the pizza rolls
Yes I am a man child, love me or leave me alone
Preferably the latter
Getting older, getting sadder, getting fatter
Television Pawn Stars, I don’t even like this show
Two hours late and I’m on the seventh episode”

The beats, supplied by S I M, Man2Work, Charlie Beans, Suhki Beats, Nolan The Ninja, and Alcapella, XXXX are jazzy, mellow, and melodic. That smooth backdrop adds a lightness and sense of nostalgic introspection and keeps things from getting too dark or maudlin. It all adds to the vibe of listening to a guy hold court at a bar at 1:00 a.m. on a Tuesday.

Chris Orrick’s combination of brutal honesty, self-deprecation, and microphone skills make him an MC worthy of your time and attention. He doesn’t take any left turns on “Out to Sea“, but it doesn’t feel like he is running out of ideas or treading water either. It is a worthy addition to his catalogue, and one of the better hip-hop albums of 2019 so far.