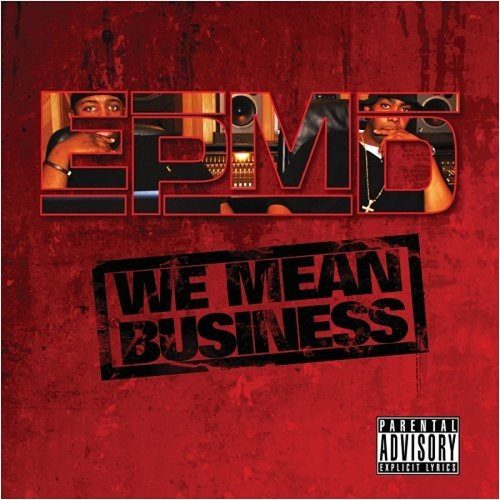 After 20 years of listening to EPMD albums I never thought it would come to the point where I couldn’t find one of their releases in stores. Even back in the day when stores like Target really didn’t carry hip-hop, the promotional muscle of Def Jam insured that “Business as Usual” made its way to the retail shelf of my local store. I’ve waxed poetic on the greatness of that album at length already so I won’t do so here again, but I will say I was firmly convinced EPMD would keep putting out one great “Business” album a year for the rest of my life. Things went south though after the ironically titled “Business Never Personal,” and even though Erick Sermon and Parrish Smith reunited and got “Back in Business” in 1997 it was never quite the same. At first there was still enough magic left in that old fisherman hat they found, but by 1999 when they dropped “Out of Business” things took a turn for the worse. Actually that’s an understatement – they didn’t just turn around, they fell the FUCK off a cliff. There was no magic left. Even for a man who dubbed himself “king of the slow flow” PMD sounded like he was sipping on syrup, and given they’re from Long Island and not Houston that was a BIG problem. Erick Sermon had modest success as a soloist both before and after their second reunion album, but the banality of the beats and rhymes he paired on “Out of Business” nearly put him out of the rap business for good.

I had honestly hoped that was the end of their ill-fated return, because I didn’t want them to tarnish their legacy from the late 80’s and early 90’s any further. For a while it seemed that was the case – Erick went back to the Def Squad and dropped the occasional solo album that people were interested in, while Parrish faded into obscurity and dropped one solo album almost NOBODY was interested in. (Five years after its release the only song from the entire album submitted to OHHLA is a duet with Cypress Hill.) That was it. Sometimes the past is best left there to be remembered fondly, occasionally pulled out and played loudly. If EPMD had never broken up in the first place, that musical bond that made them dollars together would have stayed strong, but once driven apart it rusted and eroded until nothing was left. I was glad it was over. I was glad they were out of business. I was…

Wait, what, a new EPMD album? Are they really trying this again? Last time they waited five years until they got back together. This time they’ve waited NINE. Honestly as much of an EPMD fan as I am the idea horrified me. If they sounded half as good on a comeback the last time, how much shittier could they be after TWICE AS LONG apart? Nonetheless I scoured my local retailers for a copy of “We Mean Business” in preparation to write this review, and was shocked by how little exposure this “long-awaited return” received. Nothing at Target, nothing at Best Buy, nothing to be found even at the small independent stores. I stopped looking because I was relieved I didn’t have to downgrade my childhood favorites any further by ranting about another ill-conceived comeback. The loyal RapReviews readers had other ideas. I got e-mail after e-mail requesting the new EPMD album be reviewed, so I did what had to be done. I sucked it up and shelled out $15 for “We Mean Business” on Amazon and I intend to make this my final review of 2008. I won’t be going out of business, but I don’t want to deal with their business in oh-nine, so it’s now or never.

Here’s the good news – the group seems to be well aware of their shortcomings on these “yes we’re still around” reunion albums so now they’re bringing in all of the extra muscle they can to help. Right from the start Raekwon the Chef shares the billing on the Ty Fyffe produced “Puttin’ Work In.” That’s just the first of 8 tracks with guest stars, which means they comprise the majority of this 13 deep CD. Mobb Deep’s own Havoc appears on “What You Talkin’,” Teddy Riley croons on “Listen Up,” the expected Redman and Keith Murray appearances are on “Yo” and “They Tell Me” respectively, and fellow hip-hop veteran KRS-One joins them for “Run It.” That’s one hell of a list to be sure, but I’m not even finished. Method Man joins EPMD for the DJ Honda laced “Never Defeat ‘Em,” Skyzoo rhymes on “Left 4 Dead” and guests vocalists Vic. D and Tre find their way onto the album’s E-Dub produced finale “Actin’ Up.” At least EPMD called in all their friends this time around.

There’s more good news – Parrish Smith is no longer spitting embarrassing flows. He actually manages to stay on point and on beat most of the time, which makes songs like “Listen Up” and “Run It” an actual pleasure to listen to. Erick Sermon’s style has never really changed over the years so he’s still doing fine on this album. Some have accused Sermon of being too simplistic but quite frankly he was a braggadocious rapper with a charismatic lispy delivery in 1988, so there’s no reason he should be doing it any differently in 2008. He sounds just fine on songs like “What You Talkin'” and produces thumpalicious funk on tracks like “Roc-Da-Spot” so either in front or behind the boards he’s just fine. “I don’t have to do them, I’ma do me” quips E on the track. I agree.

When it’s all said and done “We Mean Business” is short enough, well-produced enough and features enough guest stars to work. It’s certainly not the ridiculous unnecessary and costly mistake that “Out of Business” was, an album that nearly had the most apt title in all of hip-hop history. I’m not going to say this album in any way compares to their original legacy, and there’s still a little bit of chemistry missing to Erick and Parrish being reunited. At times their shared mic duties on this CD seem very forced, but the beats and guests smooth out those rough edges and help you to overlook the fact this unit isn’t what it used to be. That in itself is a hell of an accomplishment, but sadly they don’t seeem to have even one-tenth of the distribution they did on the last reunion album. It may turn out that the one business they can’t beat is the MUSIC business, because even though they’re not ready to give up old glory it’s getting harder to find outlets to sell their story.