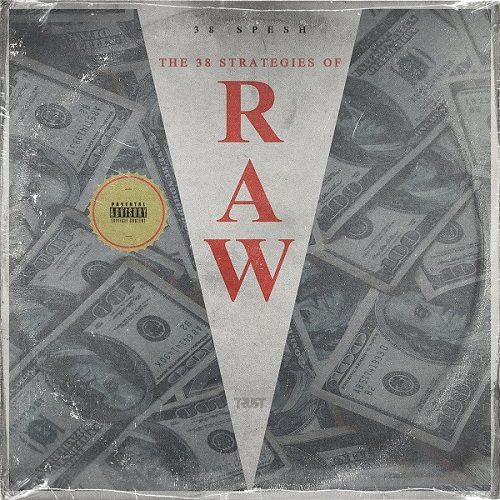 Let’s talk about rappers that are a problem. The type of emcees that impress lyrically, but also possess the IT-factor that lifts their lyrics to a whole other level. Busta in 1999, Jadakiss in 2001, Saigon in 2006, Royce in 2008. Roc Marci in 2012, Pusha in 2018. Benny in 2019. We can go on, but the noticeable trend is that drug dealer rappers are pushing a dope product on both fronts. While 38 Spesh has been around for a minute, the last 12 months have seen him breakthrough. An album with the legendary Kool G Rap, a mixtape with Benny the Butcher and recently he dropped a record with one of the hardest producers in the underground – Big Ghost Ltd. Earlier this year saw “38 Strategies of Raw” land, another short album designed to keep Spesh’s momentum going.

If you haven’t heard Spesh spit, imagine the three LOX members if they were melted down and reformed as one emcee. I wouldn’t wish that upon Jada, Sheek or Styles (because I’d have the Ruff Ryder crew on my case), but it gives you an idea of the kind of animal we’re dealing with here. Brashness, cocky humor and a killer’s mentality ensure Spesh is as sharp with the pen as he is with the scales. Right from the intro (“Piece of My Life”) Spesh isn’t messing around:

“I was easily influenced
Since a youth I knew the streets was confusing, still seemed to choose it
Keep it moving, keep from losing
Hand on keys and eyes on paper, like I’m reading music
Where was y’all when I needed schooling? Being foolish
Instead of buying houses I was seeing jewellers
We was thirsty and needed fluid
I know how to drink, but can’t find a river somebody lead us to it
The streets made me verbally abusive
Stay in new relations, ’cause my communication need improvement
The feds tried to track my recent movements
Anti-bug system inside my crib hooked up to three computers
Next time you want me, send some decent shooters”

Tricky Trippz laces the starter and blesses “Empty Plates” with a haunting production for Spesh and Fred the Godson to share some of their insight. Fred’s verse is almost like a battle rap with the intricacies of his flow and wordplay, but the final line was a bit much (“I know where his mom stay, he gon’ grieve her, in the trees is where I leaf her”). When Spesh follows up with “You n****s rap about pistols and work, but really you’re broke and your pistol don’t work” you know he’s taking this one. Lines that will make you rewind the stream are frequent and keep you on edge, where lesser emcees play it too safe.

What isn’t talked about is how Spesh is nice on the boards too. His sample game isn’t the deepest but the “simple yet effective” philosophy works for the most part. “Dark Nights” is menacing, grabbing your ear as Spesh promises to “make you ‘die Eazy’ like Eric Wright”. There are glimpses of the softer center beneath the hardened exterior – often reserved for the final track and “Venting 2” is just that. The first verse is delivered as if talking about a woman that’s done him dirty, but it turns out the “bitch” is a male friend that betrayed him. The second verse is an “ex bitch” that Spesh is thankful for because he now feels like a new man since they separated. Renewed vigor is a common theme throughout the New York emcee’s work, from the “Trust Gang” clique he represents to the relentless pursuit of financial stability. Every day is an opportunity to grow and expand and the constant stream of music is a clear indication of the hustle and New York’s past of mixtape slinging and constant collaborations.

The influence of his surroundings gives his records a ruggedness, with basslines a frequent focal point. You know he tested this record in the car, before promptly returning to the kitchen to cook up his next batch of raw. The drugs metaphor is well-worn territory, but the way Spesh has built upon his dedicated fanbase to generate a buzz with his “product”, will only bring in more customers. And the product doesn’t look like it’s slowing up – producing Che Noir’s new album, an album with Flee Lord, another with Big Ghost Ltd – to put out this much music and still maintain a lyrical viciousness is why heads know that Spesh is a problem.