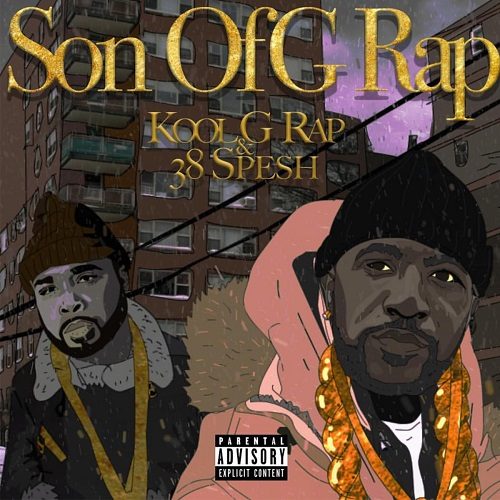 It may have been released last year, but 2018’s “Son of G Rap” deserves to be covered as it remains a great example of ignorant street rap lyricism. Just as importantly, it has beats, something many emcees now neglect in favor of just rapping over a loop or a track with limp drums.

38 Spesh has been around for a while now, generating a healthy buzz that saw him collaborate with G Rap in 2014 on “The Meeting”. It took a few years, but a joint LP with the greatest gangster rapper of all time showed Spesh has what it takes to solidify his own brand of slick talk. Whilst we all know G Rap’s technique is to fire off rhymes like an AK-47, Spesh utilizes a more calculated approach – more like a semi-automatic pistol,

Kicking off the album with a back-and-forth, “Upstate 2 Queens” sees Spesh hold his own with G Rap’s stellar displays of assonance – a bit like a hyper-rhyme alternative to Styles P and Jadakiss’ ol’ trade-offs. Just as Roc Marciano crafts his own soundscapes, Spesh’s production often holds its own amongst the heavyweight names and “Upstate 2 Queens” is a prime example.

There are some occasions where G Rap completely dominates proceedings (“G Heist”) as his storytelling is clearly superior to 38 Spesh’s more brash approach to criminal narrative. It’s difficult to confirm whether there is chemistry between the two as G Rap’s appearances are often sporadic and there are songs here where he doesn’t contribute at all. That said, there is usually a fellow veteran that steps up. Cormega lends his credence to “Dead or Alive” reiterating his latter-day reformed father rhymes, heard on records like “Born & Raised” and “Mega Philosophy”. Noreaga brings back 1997’s “Iraq (See the World)” for “Binoculars” with Griselda favorite Benny the Butcher lending some notable lines:

“I made checks with the squadron, pay respect to the bosses
Shootin’ like Lebron in game seven in Boston
Some niggas like to hustle, some like to spray bullets
Me? I had a block in the microwave cookin’
Took every precaution, there’s a price to pay with it
The State Troopers’ll pull you if your license plate crooked
Look, when they was out of town in the rented Lambs
I was dryin’ a kilogram under a ceilin’ fan
Nigga, I’m everything the critics’ sayin’
Keep playin’, pussy, and we’ll pop up on you like Twitter spam”

Freddie Gibbs demonstrates once again his lyrical prowess, accompanying Meyhem Lauren and Spesh on “Flow Gods”, and then AZ himself rolls back the years on “Honest Truth”. There’s a heartfelt moment where Spesh shares his regrets over aborted children and the lives that could have been, an alternative to the traditional murders cited in previous tracks. It’s difficult to empathize given how despicable Spesh’s character has been in the previous fourteen tracks.

As great as it is to hear all of these New York legends on one record, G Rap often steps aside, so AZ isn’t actually featured with G Rap, nor is Gibbs. A second DJ Premier beat features Spesh and Che Noir, but cries out for G Rap to murder the third verse. This is a fan being picky though, as the purpose here is to showcase 38 Spesh and throw in some names you’ll know and love to keep things interesting. In that regard, “Son of G Rap” succeeds and holds up a year later as one of the better examples of street rap with strong production, often from Spesh himself.