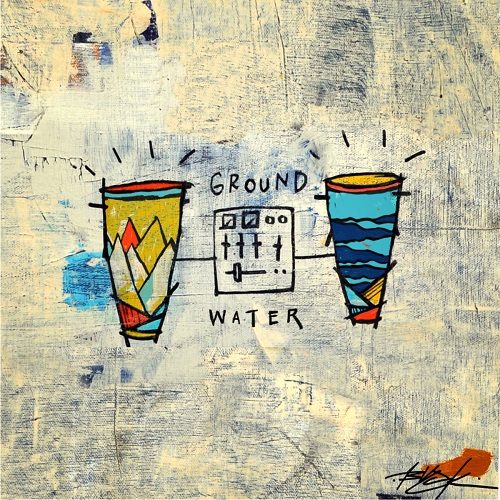 The four elements of hip hop are considered the backbone of the culture, but the title of the latest Blu album (or is it an EP?) reminded me of the actual elements. Youngsters may be more likely to pick up a videogame than be seen breakdancing on a piece of cardboard, so “older” readers, bear with me as I throw down a Pokemon reference. You see, in the popular series published by Nintendo, there are three primary types of “beast” you do battle with – Fire, Grass, and Water. You may know them by the names Charmander, Bulbasaur and Squirtle. Anyway, Fire beats Grass, Grass beats Water, and Water beats Fire.

The earthy, natural feel of Damu’s traditional approach to production, marries with Blu’s fluid, effortless rhymes so naturally that “Ground and Water” makes perfect sense for a coming together of two “beasts”. Two battle-hardened characters with a wide range of abilities. Damu the Fudgemunk represents quality. His timeless work with Insight the Truncator and last year’s excellent collaboration with newcomer Flex Mathews has solidified his status as one of hip hop’s most dependable craftsmen. Blu’s catalog is less reliable but better than it may get credit for. This year’s “A Long Red Hot Los Angeles Summer Night” is certainly the more experimental record, but fans of his breakthrough “Below the Heavens” will likely find more joy in this release.

While it’s not his most refined work, Blu combines well with Raw Poetic (formerly of Panacea) on “Share the Love”. Desiring the best of both worlds, Blu admits his wish to be “the richest emcee, but non-sociable” is an unlikely combination when politics figure so heavily in the industry. As somebody that’s struggled with their mental health, Blu’s introvert behavior isn’t surprising and the simple act of sharing the love is a common theme throughout “Ground & Water”.

Damu’s style allows Blu to reflect, admitting that he feels he has “his feet back on the street” on “Feet On The Ground”, ably assisted by an exquisite Guru scratch. A depressive tone is still detectable in the LA native’s delivery, but that urge to get back to the basics is the perfect excuse for a cipher session on “Beast Mode”. Blu is joined by Cashus King (formerly Co$$), an impressive Local Blacc, Yamin Semali and a name I’ve not seen in a long time – Shawn Jackson (of “Feelin’ Jack” notability).

As enjoyable as much of this record is, the track “Ground & Water” and then “Grey Heaven” hit heights rarely heard this year. I don’t know what Damu was smoking when he put these two together, but he’s gifted Blu with the perfect backdrop that will have the hairs on the back of your neck stand up. Not quite able to deliver the classic verses these beats deserve, Blu still does his thing:

“Sp-lifted, uh, gifted
With the flow to be specific
The coast will be Pacific,
Golden state from the village
Los Angeles, home of the champions
And the scandalous, if you can handle it
Bring your candlestick, where the sun sets
Set it in the sun, the summer’s just begun
We’re here to have fun and make funds”

Damu knows how good the “Ground & Water” beat is, as he jumps on it himself. And you know what, he’s got a nicer flow than Pete Rock! The highlight of “Rhymes and Gemstones”, again, is the filthy kicks and drums Damu has prepared. Blu is less conventional, more conversational, as he puts the true value of his rhymes into context. Spitting gems is a common metaphor in hip hop and the wealth Blu has accumulated comes from his own diamond cutter – his mouth.

“All I’ve got is my gold
And my fo’ five chrome
Rhymes and gemstones
From rhymes I’ve been flown
But how can I get her home?
If I can’t get a loan
If I can’t get a job
And I live all alone
No one calling up my phone
All I get is a dial tone”

Water may not need ground, but it is shaped by land and buildings. Blu, much like Nas, has been trying to replicate the immaculate levels reached with his debut, “Below the Heavens”, so to have his “water” focused and directed by Damu’s “ground” makes perfect sense, and ends up being Blu’s best work in years. At eight tracks, it’s enough to satisfy yet also whet the appetite for further work from both artists. “Ground & Water” may not consider Fire part of its method, because in this case, “Ground & Water” equals Fire. And it’s super effective.