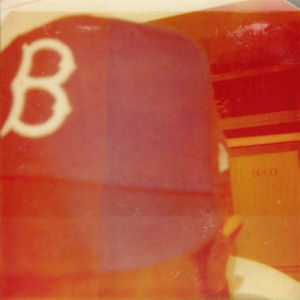 California hip-hop star Blu may not be a fan of getting reviewed but in truth he has little to fear from hip-hop critics. More often than not when Blu’s name is brought up, praises are offered for his honesty and sharp delivery, praising his ability to connect with audiences by BEING real instead of “keeping it real.” I’ve actually found it kind of hard to find anybody with something bad to say about Blu, which makes me wonder why he has it in for hip-hop writers. Perhaps he had a bad experience very early in his career which he hasn’t gotten over, but the who/what/why is something we don’t and may never know.

Perhaps that reluctance to be reviewed, whether positively or negatively, is what led to the ambiguity behind this release. It initially leaked on Bandcamp under the singular and cryptic moniker of “B.” After word of the album spread it didn’t take long for hip-hop heads to figure out C is for Cookie and B is for Blu, which makes one wonder – why do it at all? Furthermore, why take it down once everybody had figured out the mystery? Perhaps the real answer for this enigmatic behavior is that Blu simply wanted to build some buzz for B. It’s not exactly an alter ego, but as we all learned from Keith Thornton, the nom de plume is easily changed while the man under the mask stays largely the same. So call him B, or call him Blu, it really doesn’t matter what you do. All that matters is that he got people talking, and perhaps coincidentally or perhaps not, most of them weren’t critics.

There’s no hiding any more though. B’s “Jesus” came out digitally on July 26th and will be out on compact disc August 30th. The press kits hails the fact that this “mystery project” will get “a proper release” but these days a digital drop date is pretty much synonymous with a proper release as we are slowly but inexorably moving away from going to stores to buy albums. Whatever version you’ve got, “Jesus” is the kind of title that may provoke people as being sacrilegious, but I find it’s basically inconsequential. You could have called this album “Reuben” or “Cat” or “Horseshoe” or “Zephyr” and achieved the same effect. It describes nothing about the album whatsoever with the sole exception of the title track, which was produced by Madlib:

“I was six when I played Jesus, nowadays I could play a demon
Back of my mind, hear my ma speaking
To a kingpin, from an ink pen
Askin he then, what he believe in?”

Madlib plays the smooth note for Blu here, layering up a lightly tapped drum track with a cool guitar riff and Blu’s slightly distorted vocals. It sounds like he got a little too close to the mic and didn’t equalize the volume, but since it never gets better or worse it occurs to the listener this is an intentional artistic choice. I don’t think it detracts from the song so it’s certainly not a negative criticism, just a note to those hearing it for the first time of what to expect. And speaking of what to expect, the album declares itself to be “New Shit” right at the start yet Blu never utters a single word, letting the samples of someone singing in a foreign language do the talking. That’s arguably new after all. “What If I Was” finds B asking existential questions, trying to find and define the meaning of his life and get some swagger at the same time. The Alchemist produced “Doo Whop” is a Cali posse collabo’ of the mellowest order, forming a trio with Killa Ben and Planet Asia that’s easy to enjoy. Even the short tracks like the Hezekiah produced “Burgandy” hit high notes.

Whether you call him B, Blu or Johnson Barnes, “Jesus” is an intriguing albeit quickly digestible album – we’re not even talking a whole half hour. Ultimately I get the feeling that’s the point though, and perhaps where Blu is coming from in the first place with regards to his issues about critics. Not every word a rapper says has to be profound, and not every song he makes has to be the greatest opus of linguistic skill ever created. The very title of the album could be considered a rib on those lofty notions, when in fact as a song title suggests this is simply some shit “4 U” to enjoy. Don’t take it too seriously, even though the truth is, Blu is seriously skilled.