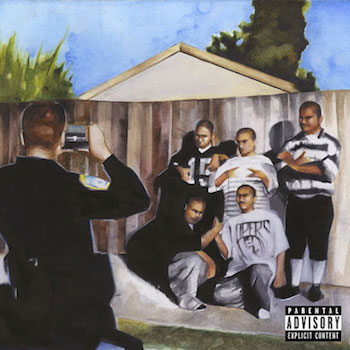 It’s time to get slaughtered, and not in the alcoholic, “call me an ambulance” sense. I thoroughly enjoyed Blu & Exile’s “Below the Heavens”, but while I wouldn’t call it a classic, it is certainly a great example of modern hip hop (despite being seven years old). Since then though, Blu hasn’t grabbed me with any of his subsequent records, and even when he did reunite with Exile for “Give Me My Flowers While I Can Smell Them”, it wasn’t as jaw-dropping as their debut. With Exile going on to work with Fashawn on the superb “Boy Meets World” and this year’s slept-on gem “Dag Savage” with Johaz, Blu has delivered another largely disappointing album.

There wasn’t really any need for two discs, being as they total 76 minutes between them. Last time I checked, CDs could hold up to 80 minutes of music. A minor point, but a strange decision nonetheless – certainly annoying if you don’t have a car with a CD changer (that isn’t the wife). But what of Blu, the emcee that’s faced the underground equivalent of Nas’ “Illmatic” situation? His debut with Exile is held in high regard by critics and fans alike, and it’s still one of my favorites seven years after its release, but is Blu’s “Good to Be Home” a return to form? Frankly, no.

There’s too many tracks with guests for a start, that Blu is often kicked to the side on his own project. It’s not so much “Good to Be Home” but “Good To Have Friends”, with a who’s who of LA artists all chipping in. LMNO, Fashawn, Phil Da Agony, Evidence, Co$$ and numerous others all lend their tones but none really steal the show. The one collaboration that works well is “Red & Gold” which sees Prodigy’s bluntness pull Blu back down to earth from his abstract rhymes that resonate throughout a lot of his recent work. It also kicks the second disc in to a higher gear, following the first disc’s dreariness. “Child Support” grabs the listener by both ears, not only because of the cranium swinging pace of the production, but the fact Blu’s talking about how he doesn’t want to follow in his father’s footsteps.

Nothing is more frustrating than hearing Evidence and Alchemist rapping clear as crystal, over what can only be described as what you hear in a nightclub toilet. Not the local slut being taken up the shitter in the nearest lavatory, but the bass-y, distorted sounds pumping through the walls. At times, it’s bordering on un-listenable. It’s a strange experience, because everything sounds like it was produced underwater. Lo-fi mix-downs, either due to artistic direction or simply saving money on the engineer is a noticeable feature of the album that will likely make or break this record for many. If you throw this on after listening to the Step Brothers or Rick Ross album, it’s like losing an ear – yet somehow, Bombay is gifted enough to make the most muffled of beats drill in to the listener’s subconscious.

The beats are still catchy, yet they lack certain sheen, as if you are often listening to the music through some tinny laptop speakers. Some songs benefit from the budget sound (“Angel Dust” is funky as hell) but are negated by horrid concoctions like “Rap Dope”, which is essentially three minutes of pure tinnitus. “The 50z” is a fun, infectious number that complements tougher tales of “The West”. Yet, as each track passes you’ll realize that none of them are particularly memorable. Blu has lost some of his perspicuousness, one of his best assets that lit up “Below the Heavens”, and that’s a god-damned shame.

“Good to Be Home” isn’t a horrible album, but one that clearly benefits from a certain audio set up. No matter how I listen to it though, whether it’s through headphones or in the car, I can’t appreciate it as much as I should. We all know Blu is one of the best lyricists in the game, but he’s testing our patience yet again with another frustrating release. This is an album of two halves, and you may not have stuck around to experience the second disc by the time the first finishes. It’s a tough listen. There’s a reason it’s taken over six months to get a review done, because it’s not an album that has grabbed me, and I’ve been in denial following the reception its received from other websites. This album is an effort to listen to, and it’s pissed me off more than it should.

Maybe I will get slaughtered in the alcoholic sense after all.