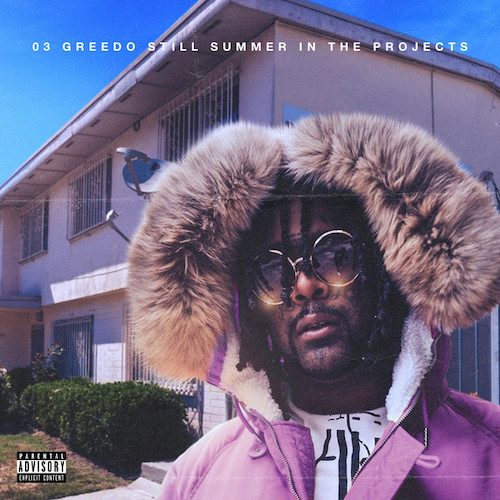 Still Summer In the Projects

03 Greedo :: Still Summer In the Projects

“Niggaz steady hatin on the king of the motherfuckin West coast
Nigga I’m more than that nigga, I’m the kind of this fuckin rap game
you weird ass bitch!”

That’s as suitable an introduction to 03 Greedo as you can get. Born Jason Jamal Jackson in West L.A. in 1987, Greedo started his rise from hip-hop obscurity to national recognition with his “Purple Summer” mixtape series — or so his bio says. I’d be full of shit if I didn’t tell you I only discovered Greedo after he was sentenced to 20 years in prison in 2018. With “good behavior” he could be eligible for parole in five, although it may be hard for him to recapture the momentum he had at the time he started his bid.

“Still Summer In the Projects” is a curiosity, and not because it came to my attention far later than it should have given Greedo’s success. It’s a curiosity because the entire album is produced (AND executive produced) by Mustard a/k/a “Mustard on the beat, hoe.” Considering he’s the hitmaker behind dozens of artists who have blown up commercially in the last few years, let alone the flavor-of-the-minute that older artists call to resurrect their careers, I would have expected his music to be all over TV and radio. His legal problems might explain why programmers are avoiding his music, though that kind of notoriety has usually made rappers MORE popular not less. What’s more odd is that I can’t find “Still Summer In the Projects” at retail even though it’s a studio album, not a free mixtape, and if it weren’t for the entirety of it being uploaded to stream I couldn’t even talk about it.

I searched through the entirety of “Still Summer In the Projects” looking for what gave 03 Greedo his sudden ascent to being a known factor in rap music. I have to believe what’s on this album reflects the material that was on the mixtapes preceding it, which only deepens the mystery surrounding it. In terms of his sing-song flow he’s comparable to Kevin Gates, Post Malone and Future, but I wouldn’t necessarily think him superior to any of them. When he comes closer to straight spitting on songs like “Grapevine” I can start to hear little hints of a style that might make him stand out a bit.

Honestly though I’m struggling to find what really sets 03 Greedo apart. Songs like “Visions” and “Twisting the Lens” have so modulated his voice that it’s indistinguishable from his aforementioned peers, his hooks aren’t more catchy than said same, and his lyrics aren’t prophetic, profound or even that personal. He’s flossing and showing off, which you would expect for the success he’s achieved, but at times he even struggles to do that. “Twisting the Lens” may not have more than 20 different words in the entirety of the song — I’ll leave it to someone else to count them though. He repeats the chorus like it’s the verses and vice versa ’til the point the difference between them is indistinguishable.

In many ways “Still Summer In the Projects” is the ideal example of succeeding by copying success. 03 Greedo’s lack of depth and highly AutoTuned delivery along with Mustard’s highly listenable production are a Icee for a hot summer day — something cool and refreshing that quickly melts and is easily forgotten. I don’t for one second doubt that Greedo is among the realest of the real ones out there because he wouldn’t be doing a 20 year bid just for petty larceny or not paying his traffic tickets. It’s amazing that none of that comes across on his album. Rap is the ideal genre to take real stories from your life and turn them into song, yet somehow this certified G comes across as third class mail. Until I figure it out I’m going to keep listening to 03 Greedo and try to catch what I missed.