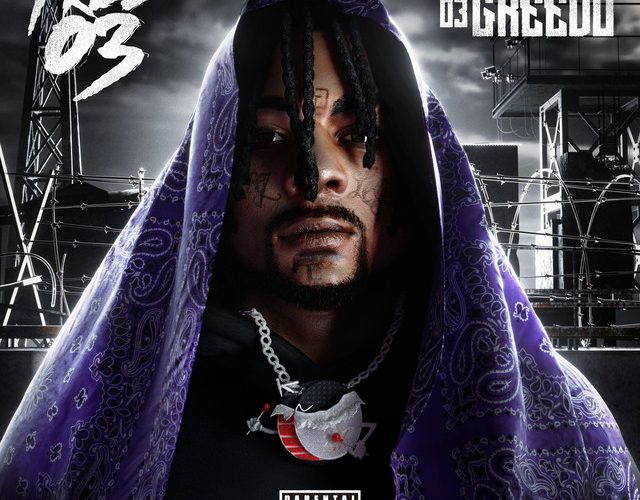 The title of “Free 03” would be apt if 03 Greedo was still locked down, but the artist born Jason Jamal Jackson was paroled on January 12th, 2023. Given the fact “Free 03” came out three days before his release (hell of a coincidence), it’s clear that a majority of the raps were still recorded over the day phone at exorbitant cost. You think going to jail is bad? Partner that’s only the beginning of the story. You pay “prison tax” for everything from ramen noodles to long distance phone calls, all while being paid less than minimum wage for your work… or none at all. Greedo was making the best of a bad situation, but it also makes tracks like “Today” less than ideal.

Producer Mike Free did what he could with the material and many of the tracks are at least listenable as a result. The aforementioned “Today” has such a slick piano, drum and bass thump I’d enjoy it more as an instrumental. The cleaner vocals undoubtedly came from the marathon recording sessions he did before leaving to serve his prison bid, such as “I Can’t Control Myself” featuring OhGeesy. The song would not be out of place in rotation on FM radio (with censoring) or XM radio (without censoring), complete with heavy bottom and heavy AutoTune.

The difference in quality between songs makes it slightly difficult to evaluate “Free 03” fairly. I’m simultaneously impressed that 03 penned his bars behind bars and got enough phone time to spit high octane raps like “Hype” in one take. The downside is that I can’t not think about how much better these vocals would have sounded if he had waited and hit the studio to do them with a real microphone and an engineer mixing it on the spot. Lines like “RIP to Black Panther, lost a whole lot of my brothers to cancer” manage to break through in spite of the recording issues.

And then of course there’s the oddity of “visualizers” that’s becoming far more commonplace whether or not a rapper is on lock down. “Midnight Love” is another song that you can guarantee was recorded before he left to do his time, but the only way to promote it through YouTube is a looped CGI clip of 03 sitting at a mile long table like royalty, complete with wine and cheese to compliment the midnight love-making. The way the camera pans the scene might make you dizzy if you stare at it long enough. Listen to it in the background or through Spotify to avoid nausea.

Now back to Mike Free for a minute — he’s solid but he’s no Kenny Beats. He reaches his peak on the incredibly ironically titled “No Free Features” with the late Drakeo the Ruler. The visual form of the song has the same CGI loop of Greedo at the dinner table (seems less apt) while the watery, futuristic, echoing chords and drum rolls sound like the cutting edge of rap. If he had more tracks like this and less like “Buss Down” that feel like discarded Jermaine Dupri ideas, I’d be more excited. Mike Free has the potential to be a new Kenny but falls back into cliched rap sounds.

In the end “Free 03” is remarkable for what it achieves under the most difficult circumstances to make an album possible, even if that makes for a wildly uneven listen with incredible highs and lows. The good news is that Greedo is out now so he’s got a fresh start on his career without those limitations handicapping what he can do nor who he can work with, so provided he doesn’t violate parole (or get set up by the police to violate — let’s not kid ourselves that it happens) he can get right back to business as usual. Hopefully that business isn’t in the trunk of his car any more. You’re a real one Greedo but you have nothing to prove to anyone now. Stay free.