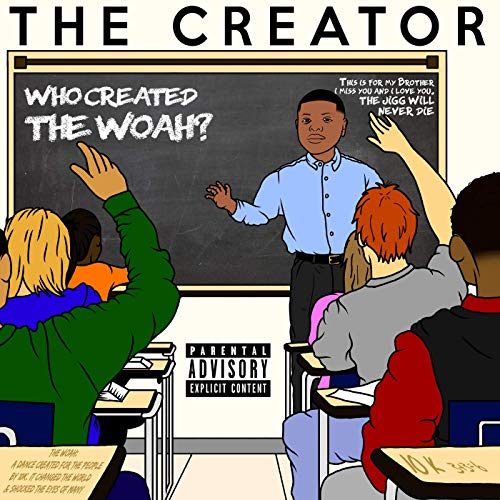 There are so many rappers on the scene now it’s almost impossible to keep track of every new emcee to go mainstream. 400,000+ are keeping track of 10K.Caash though — a Dallas, Texas rapper sometimes credited with creating a dance called “The Woah”. Of course like every dance craze that goes wild, multiple people have claimed to be the first artist to do it, but so far as I know 10K.Caash is the only one to get a deal from Def Jam out of it. If that doesn’t make him the progenitor at at least makes him the face of the dance as far as the masses are concerned.

The issue is so contentious though that 10K.Caash put a reference to it on the cover of his major label debut “The Creator“. It’s this controversy combined with an Instagram following so large he’s earned the coveted title of “influencer” that finally pushed him so far in front of my nose I couldn’t look any direction without seeing him. In a sense he’s proving the old axiom true that it doesn’t matter if they’re saying something good or bad so long as they’re talking about you.

10K.Caash is working with a lot of solid producers whose heavy bass beats I’ve come to appreciate on “The Creator“. Kenny Beats (a/k/a “Whoa Kenny!”) is behind the short but hard hitting “Aloha” track heard above along with “Swajurr Fitness” featuring Famous Dex and “Mutumbo” featuring Rico Nasty. Tay Keith laces the album’s longer cuts “Rockstar Swajurr” featuring Asian Doll. Pooh On Da Track does “Swagg On Mars”. Even if a track isn’t necessarily your flavor most of them are only a minute or two long, so you’re quickly on to the next episode.

Unfortunately at some point I have to address the lyrics. “Three plus three, that equals six” is an actual line from “Dip Swagg Dip” and unlike Big Shaq it’s not delivered for comedic effect. In fact even though Michael Dapaah was clearly parodying UK’s grime scene, he approached the microphone with enough actual swagger for his parody to go super viral. 10K.Caash is not delivering these words with that level of chutzpah. He’s spitting each word in that quote one at a time, slowly and deliberately, and that’s typical for a 10K song. Another things that’s typical on these short tracks is that he doesn’t even seem to know how to flow. I could generously assume this is a deliberate style choice, and 400,000+ people would agree with me if I did. Listening to tracks like “West Coast Cure” though it feels less like style and more like “I got f#%*ed up, went in the studio and started talking s%#t.”

At least we know he likes Dragon Ball. A lot of the time though he doesn’t “rap” so much as approach the general vicinity of what a rapper would do. It’s a vexing conundrum since I can tell the vocals were cleanly recorded in a professional studio, and there are real top notch producers all over this release, and if he wasn’t a cultural phenomenon he wouldn’t have gotten a deal with Def Jam. I’m running out of ways to be polite though so I’m just going to have to be blunt.

I want to be absolutely clear about my respect for 10K.Caash. At only 18 years old he’s undoubtedly a huge success. He’s got the kind of clout you can spend like it IS cash, and he’s certainly done so in landing both a major label record deal and a bevy of top notch producers to make him sound good. In fact he sounds so good that he can start a dance craze with pretty much any track off “The Creator” at any time. Speaking of producers though there’s another artist from my youth who I still think of as The Creator any time the phrase gets used. Many people mocked him as being better behind the boards than on the mic, but for my money he’s a hundred times the rapper 10K.Caash is and an “influencer” of rap sound for three decades.

If you like short songs with abstract lyrics that are often nonsensical over incredibly heavy beats, 10K.Caash is your man. If you like well produced tracks with raps you can actually follow, get wreck with a different creator.