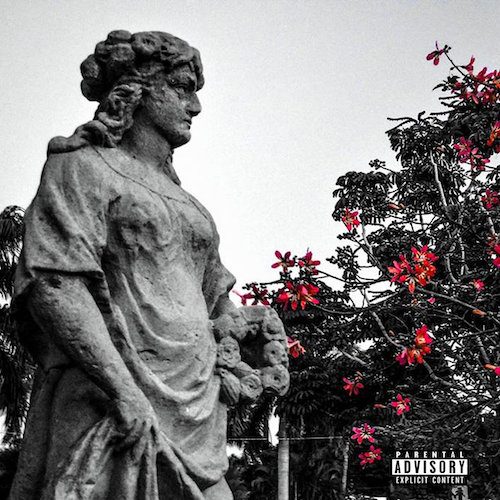 This album is something of a weird animal. By length alone I can classify Reckonize Real x Guilty Simpson’s “Carved From Stone” as an album since it clocks in at over a half hour. If this were a UFC fight though that result would be overturned for puffing an inhaler between rounds. Track 7 is an “Outro” that’s only 26 seconds long, and everything else that follows is an instrumental version of tracks 1-6. If it weren’t for the duplicate tracks there would be no questions this was an EP release.

I’m going to make an exception to that rule though thanks entirely to the production efforts of one Reckonize Real. By now you should already be well familiar with Guilty Simpson, who legend has it was one of the late J Dilla’s favorite emcees to produce for. Simpson has a very no nonsense laconic Detroit flow, although laconic may if anything be understating it. Simpson is conversational. There’s no doubt he’s rapping and rhyming, but if you took away the beat you could feel like he was sitting across the table from you drinking a cold one and telling you his life’s story. There’s no sense of urgency to finish that story — you’ve got all night and lots of beer.

Now flip that “no music” script back around and put Reckonize Real in the place of James Yancey. It’s not every producer around who could step into a spot once occupied by a rap music legend, but Reckonize Real does it so ably on “Carved From Stone” that it would actually be justified to buy this album for the instrumentals alone. The sweet ivories and snares Real rolls under Simpson and Georgia Anne Muldrow on “Got Your Back” would inspire ANY conversationalist to start rapping. “No Love” featuring Chuuwee could be mistaken for a 1990’s DJ Premier cut, and that’s meant 100% as the highest of praise for an instrumental. “Can’t Run Away” with M-Dot and Mayhem links Detroit to Boston and just makes me think of the late Keith Elam too.

You can argue a lot about what this album is, an EP or a LP, but what you can’t argue is the quality of what you’re listening to. “Carved From Stone” was a very apt title from this release. It feels like Reckonize Real took that hard Detroit rock of Guilty Simpson, chipped a piece off here and chiseled a bit there, and created something enduring that looks soft and natural but is still hard as hell or LL Cool J. That’s not to say Guilty Simpson will battle anybody (I don’t care who you tell) but the otherwise laid back emcee could be coaxed to spit a diss if either Dilla or Real put down the tracks for him. This one will mellow your mindstate no matter how hard your day was.