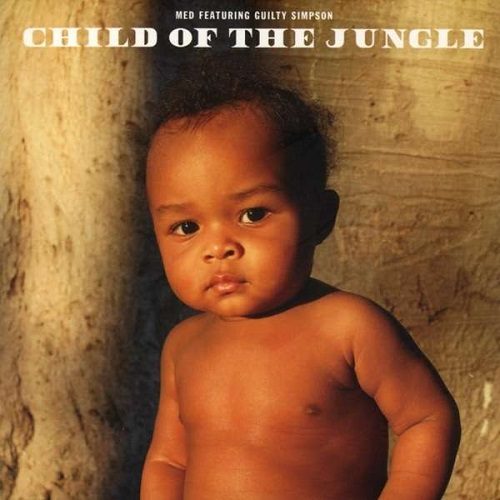 Guilty Simpson’s debut “Ode to the Ghetto” affirmed the bond between two local scenes that shared an affinity for freewheeling beats and raps grounded in reality. The holy matrimony of the liason was “Champion Sound” by Jaylib, the tag team of Madlib and J Dilla. Both came from a group background, one with Lootpack in Oxnard, CA the other with Slum Village in Detroit, MI, but their joint album was a rare moment of two individualistic artists recognizing themselves in each other.

The hub for the connection between the two unlikely sister cities was Stones Throw Records (originally out of San José), who also released “Ode to the Ghetto”, which seems to serve Simpson as a blueprint for his career. The Random Axe lineup was already present on “Run”, while his latest collaborator, Oxnard MC MED (also known as Medaphoar) guested on “The Future”. This time around Guilty is invited by MED to feature on his Bang Ya Head label and the album “Child of the Jungle”.

For some reason, opener “Mad” finds Guilty in a laconic mood, as he doesn’t seem too enthused to be back in Cali, or to be energized by the Madlib beat – which indeed isn’t particularly energetic. The most striking aspect about the track is DJ Romes cutting up Cassidy. Stay tuned, though, and you’ll see why he cannot help but sound dead serious when delivering lines like “Me and my dog put in work / make tracks like a foot in dirt” and “Pullin’ my own weight / cause relyin’ on another is sealin’ your own fate / Me and my kin won’t bend and won’t break”.

These quotes practically sum up the project from front to back. You are responsible for your own actions and advancement but it can’t hurt to pool forces – not so much to shed individual responsibility but simply to get ahead easier. Chock-full of pledges, affirmations and assertions, the premise of “Child of the Jungle” sounds as banal as rap can get. But there’s credibility, something other performers who deal in other forms of banal rap very often lack. Not Guilty Simpson. In “Visions”, every word is well measured and weighed:

“I – started with pennies
Puffin’ Newports, passin’ Henny
All about takin’ what we wanted like, ‘Gimme!’
Never had much to offer
but the blue collar way to make a dollar
That elbow grease and dedication
Somehow, someway I keep pacin’
Wishin’ I could use that time they keep wastin’
Walkin’ my thoughts through possibilities
And the potential is killin’ me
The what-ifs, the pros and cons
Skatin’ thin ice on a frozen pond
Me and the paper got the closest bond
I love to emcee
But not enough to do this shit for free”

For “Visions”, veteran producer Nottz taps into that Dilla/Detroit vibe, adding a touch of jazz to a reassuring backdrop, while singer Georgia Anne Muldrow gives a surprisingly conventional performance. True to the aforementioned axis established in the early ’00s, the majority of the album’s collaborators are spread between the Golden State and the Great Lakes State. Karriem Riggins (“Lock N Load”) is a Slum Village collaborator, Premethius is a local Oxnard producer. Black Milk (“Face Down”) and Apollo Brown (“Ice Service”) famously represent Detroit, but it’s the underrated 14KT who does Michigan most proud with the musically rich “The Hundreds”, which opts for a classy, ambitious sound that also possesses solid party groove potential. And Kokane as the featured singer certainly won’t stand in the way of a party.

While producers and rappers from the Ox and the D have been finding common ground for quite some time, their collaborations are usually such that everybody gets to be themselves. MED can boast that he’s “off the leash / so damn west that I ended back east / 360 to Long Beach”, while his partner in rhyme will drop existentialist notions like “Did my share of negative, and I’m tired of it / Glad nobody died from it” or “I got a wife and crib / and a right to live”.

It occurs to this reviewer that the predominant philosophy in mainstream rap music today is self-satisfaction. For rap artists around the world it’s a given to take things for granted these days. It’s a neverending parade of bloated egos claiming to be entitled to whatever status they’re fantasizing about. The struggle and the hustle are mostly skipped over in today’s rap narrative. But when MED and Guilty Simpson team up with Blu & Exile for “Life’s Good”, they don’t let the good times go to their heads. They pay dues first, reap the rewards later. “Past moons wasn’t easy”, reminisces MED, adding, “poetic how we still get it”.

For those who would rather hear the word ‘incredible’ than ‘credible’ when rap is described, I’m afraid this is not that kind of record. The only slightly unusual aspect about “Child of the Jungle” is the combination of two such distinctive styles. Guilty has the ultimate sobering presence but can still be highly creative on the rhyming end. MED often uses a truncated language that still manages to be trenchant, as evident by crystal-clear imagery like “Without the chains or record sales it’s still golden” or “Every dime got two sides”.

While direct interactions between the two are scarce, they’re always on the same page, whether taking a battle stance on “Ice Service”, begrudgingly giving props to women who have their own ambitions on “Time”, or simply sharing similar experiences like when Med talks about being late with the rent and points across the room, “The homie noddin’ like he goin’ through the same shit”.

All told, “Child of the Jungle” is a traditional record – from the Son Doobie sample in “Dedicated” to the ragga chant from Black Shakespeare and words of wisdom from Big Roc (possibly an incarcerated Michigan rapper) on “Loyalty”. It’s almost surprising not to hear Snoop turn up on the universally West Coast “Pie” (where mndsgn digs into that lean ’80s SOLAR sound), not to mention the other big-name feature that would make an awful lot of sense but hasn’t happened this time around, Oxnard’s own Anderson .Paak. These things are not out of reach for MED and Guilty Simpson, and even if they don’t materialize, these two stand their ground: “Rainy days – savin’ pay / Hopin’ the negative people’ll stay away / We vibin’ and the beat goes on / Survivin’ in the streets so long / It’s therapeutic each time we speak those songs”. “Child of the Jungle” may not be a non-stop palatable plate but it’s nutritious soul food in every respect.