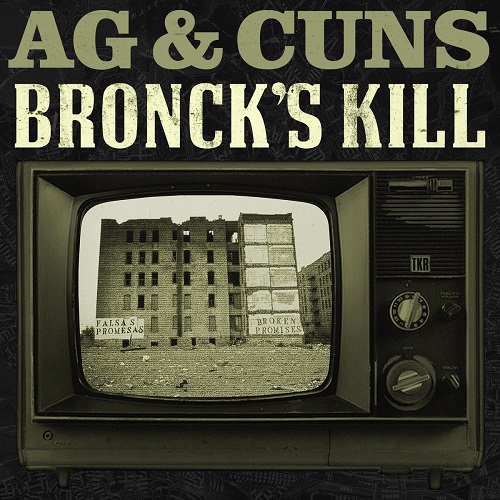 After Masta Ace & Marco Polo’s “A Breukelen Story”, it’s A.G.’s turn to revisit the geographical history of New York City. “Bronck’s Kill” could be translated to Bronx River, the ‘kille’ denoting a riverbed in Middle Dutch, and the Broncks being the Swedish and Dutch family that gave the Bronx its name. The Bronx Kill, however, exists in present time, and it runs apart from the larger Bronx River, a small strait that connects the Harlem with the East River, its waterside once the location of the farmhouse of Jonas Bronck.

Bronck’s/Bronx Kill flows just a few blocks south of Patterson Houses, the base from which young Andre Barnes went on his expeditions into the world of hip-hop. Still getting mileage out of his remote beginnings (in the heart chamber of hip-hop, nonetheless), his latest trip, which resulted in the “Bronck’s Kill” EP, took the veteran MC to Italy. Cuns, a relatively new name in the producer game, has done tracks for Benny The Butcher, Conway The Machine, Guilty Simpson, Big Twins and Crimeapple, showing a predilection for gruff and grim rhyme slingers. A.G., who came to prominence as one half of duo Showbiz & A.G. in the early ’90s, has over the years developed an apprehensive world view of his own, but tempers it with spiritual intuition.

If beats and rhymes are supposed to complement each other in some way or other, then Cuns avoids coming across like some random acquaintance of a seasoned globetrotter because the six beats on “Bronck’s Kill” evoke similar emotions as the rapper who guests on them, oscillating between anxious and assuring. “Get the Feeling” reverberates with organ chords that waver atop a halting rhythm section, resulting in a piece of music that is soothing enough not to spook you and unsettling enough not to lull you. “When it Rains it Pours” is, despite its title, a gentle, warm drizzle with steady drips of notes produced by actual instruments. “Around the World” and “Rock N Roller” share a pensive pace, while “The Last Advice” is a shorter interlude (likely the original endpoint of the EP), concluded by cuts lifted from the “Goodfellas” opener.

Produced in Rome, “Bronck’s Kill” isn’t out of A.G.’s way at all. Particularly “Around the World” continues the conscious vibe of his last full-length, “The Taste of AMBrosia”. A.G. still communicates casual truths like few others (while often addressing the rap geek in you, see “When it Rains it Pours”), but the EP’s finest moment comes in the profound sigh A.G. places after its opening line “So many drugs at my disposal”, a passing but highly acute adlib followed by “So much access, it seems like I’m supposed to”, and repeated after a mention of an equally high availability of firearms in the same neighborhood. It’s the privilege of a veteran to sometimes only need the briefest of moments to remind you of his qualities.