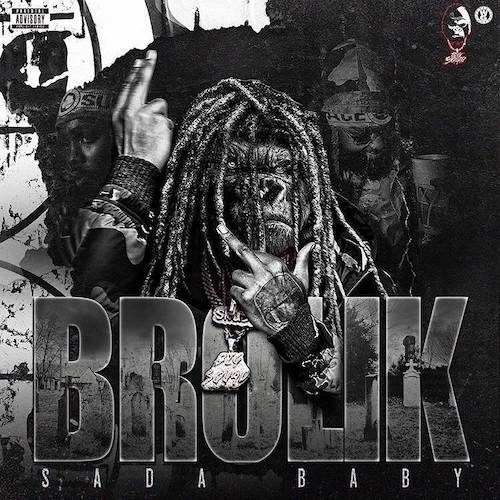 Sada Baby (born Casada Aaron Sorrell) is a Detroit native who has already politicked his way beyond 8 Mile Road in his short time on the scene. He has a deal with Asylum Records and has done tracks with fellow D native Tee Grizzley to build up his profile; releasing a free “Brolik” mixtape via DatPiff will only increase it further. With so many free albums these days though you need to do something to stand out, and having a song called “WWF” on it worked for me given I’m an old school pro wrestling fan.

“This my white boy Loyal, and he royal, William Regal with it
Make this yabba do a Spinaroonie, Booker T them n-ggaz
Make that 40 Diamond Dallas Page, DDT a n-gga
Kill ’em when I see a n-gga cyclopes, red beam a n-gga”

To be fair I had no way of knowing if he’d invoke the squared circle given his cover art is some “Planet of the Apes” shit, but Sada Baby did not disappoint. I was also concerned that Sada was on some Lil Wop shit given that the intro “Press Up” starts very gravelly, but we can tie all of these things together with the song “8 Legged Ape” with Sada jumping all over the track, bouncing from a tiger’s growl to the hyped up hyphy of a Yay Area rapper. His performance is so rowdy it leaves his guest star Tec in the dust.

In fact with Sada Baby’s level of energy, most of the guest appearances on “Brolik” are unnecessary. Despite once again bringing wrestling into the proceedings with the aptly named “Triple Threat Match”, neither Skilla Baby nor ShittyBoyz Babytron (what’s up with those names) are anywhere close to hanging with Sada. It’s fine to put your friends in the mix when you release a free project so they get some shine too, but it’s clear why Sada’s the one with the record deal on songs like the speedy “Bully Ball”.

There’s one one person who comes close to having the star power or musical chops of Sada Baby here and that’s Chicago drill rap star G Herbo (f/k/a Lil Herb) on “Baklava”. I’d actually to see more of that D-Town to Chi-Town collaboration considering I’m partial to both cities and have favorite teams in both places, but that’s just personal feelings. G’s bars are positively medicated compared to Sada, but at least his unique Chicago flow is on hit.

I’ve got to be frank about Sada Baby — there’s undeniable charm to his vocal tone and delivery even though a lot of the time he’s not really saying anything at all. “Fuck Slime” seems more like a stream-of-consciousness track, just saying whatever he was thinking at the moment he walked into the studio. “I ain’t tryin to fuck on that bitch unless she yours/naw, for real, I want the bitch you with/I bet yo’ ass sick of my shit/and I bet yo’ ass ain’t gonna drop shit”. He’s just talking to hear himself talk, but I’m listening too.

Reading the comments section on DatPiff made me think the internet is much harder on Sada Baby than I’m being here. Heads were unapologetically dropping messages like “This shit trash” and “He should quit rapping and work at Amazon.” I wouldn’t go nearly that far. He’s got an interesting voice, can change up his breath control and tempo to suit a track as needed, and puts a whole lot of passion into his delivery. Much like a lot of rappers though he needs to find out what to DO with his voice. “I’m so hard and everybody else is a pussy” just isn’t enough reason for an album. “I’ve got more money than you, I’ll take your bitch too” isn’t either. Sada Baby’s “Brolik” isn’t potential wasted — more like potential unfulfilled.