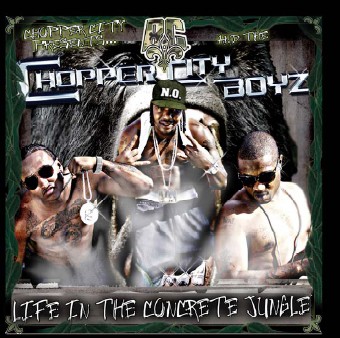 “Life in the Concrete Jungle” is definitely not an album for the critics. B.G., Gar, Snipe, and crew didn’t go into the studio hoping to record something to challenge “Hell Hath No Fury,” “Ready To Die,” or even “The Carter 3.” They aren’t looking for five mics or an XXL or a ten of ten. The hipsterati at Pitchfork aren’t going to bless this with their stamp of approval, and Entertainment Weekly isn’t going to give it an A-. They make that clear on “Never Look Back:

For the most part, the lyrics don’t go much beyond flashing cash and jewels, making it rain in the strip club, bragging about criminal and sexual exploits, professing realness, and taking out haters. The lyrics roll out of the crew’s mouths in lazy drawls, as if they knew they were talking bullshit but didn’t care. It’s not uncommon for Southern rappers to stress delivery over content, but none of the Boyz have the delivery of someone like Weezy who can make bullshit sound good. Too many of the lyrics are just standard hip hop cliches repeated over and over again: the term “crisp white t’s” is used in at least half of the tracks.

They do attempt to get serious on a few songs, with some success. “Maintain” talks about the struggles of life over the street, complicated by a mellow, meloncholy beat; and “Never Look Back” is like a statement of purpose where the Boyz lay out where they’ve been and what they want to do. However, their more introspective side is often derailed by bogus lyrics like “the rap game gotta lotta rich niggas in it/ But if you ask me, it’s gotta lotta bitch niggas in it.”

The majority of the beats are typical Southern rap: skittering hi hats, symphonic synths, nods to the Triggerman beat, and the occaisonal bleep and whistle. They may not be original, but they are done well. A couple tracks mix things up a bit, like with the dirty funk of “I Like It,” the blues guitar on “Never Look Back,” or the sinister soul of “G.A.,” which has the killer chorus of “Nigga, don’t play no games/I’m allergic to broke and I’m allergic to lame.” There are also a few weak songs, which is inevitable on an album with 17 cuts (the worst offenders being “Dick Suck” and “Dealer,” which bites Michael Jackson’s “Beat It”). “Life in the Concrete Jungle’s” biggest issue is its lack of originality. It sounds a lot like a thousand other Southern street rap albums, and too much of it treads musical and lyrical territory that has already been done to death.

“Life in the Concrete Jungle” doesn’t attempt to do much innovative, original, or unique. As a potential hip hop classic, it falls short. Taken for what it is, the rap equivalent of a straight-to-DVD movie, it meets its goals. It’s not surprising that as a critic, I wasn’t feeling this album. I wasn’t meant to like it, and if I did, it probably would be a failure with its intended fan base.