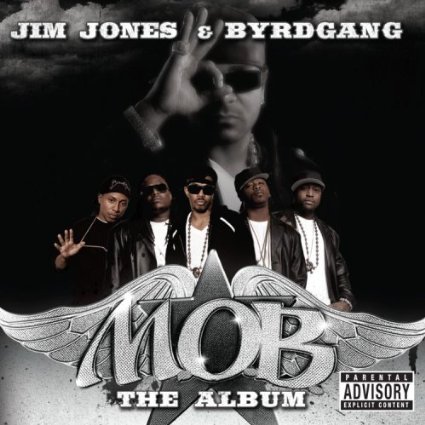 Hip-Hop’s dysfunctional family is back! Sure, 50 Cent and his G-Unit/Unot camp have provided plenty of drama, but in terms of quantity no one can hold a candle to the number of conflicts in the Dipset family. It’s hard to keep track of who is mad at who in Dipset. Cam’ron and Jim Jones aren’t on talking terms, Cam’ron recently sold Juelz Santana’s contract to Def Jam, Purple City is off doing its own thing on Babygrande. Matter of fact, the size of the Dipset extended family is the cause of most of the problems. While the tension can lead to good news stories, frustration sets in once a fan has to sort out the mess. If you’re a longtime Dipset fan such as myself, you probably want to support the crew even after all the splits, but to do so would take quite a large budget and even more patience. See, Juelz is now on Def Jam and apparently has his own label in Skull Gang records which will likely lead to a third generation of “Dipset” rappers. Freaky Zeeky joined up with Jim Jones, but not before starting his own 730 Dips record label and introducing a new crew. Jim Jones also started his own Byrd Gang Records and is pushing his Byrd Gang crew. This still doesn’t take into account guys like 40 Cal, Hell Rell, Duke Da God, and JR Writer which may be aligned with one or all of the former Dipset heavyweights. The question then is who to support?

Take Byrd Gang, the latest incarnation of the Dipset family served up by Jim Jones. Having Jim Jones involved is a plus for me since I’m a fan of the man’s lyrical swagger, but I’m not convinced. The last time I was feeling Byrd Gang they had teamed up with Purple City for a dope anthem. It turned out Purple City wasn’t technically part of Dipset AND the most talent came from Agallah who provided the beats for the crew. On top of that, Byrd Gang has had its changes over the years. Once consisting of Jones, Stack Bundles, Max B, and Mel the Matrix, the crew has seen members come and go. Stack Bundles was murdered and Max B left due to creative differences. Currently Jones and Mel are joined by NOE, Freakey Zeeky, Sandman, and the offensively named Chink Santana. Seriously, Chink Santana’s name gets edited on the track listing on iTunes! It’s no surprise that the letters M.O.B. stand for “Members of Byrd Gang” since the crew has to reintroduce itself with every release.

The lead single is representative of what to expect as “Splash” gives us a crew cut, over an O.K. beat. It’s meant to be an anthem, but the hectic drum and organ combination doesn’t quite connect and “Splash” isn’t quite the catchphrase Jim Jones’ envisioned. Lyrically, we get a typical Juelz Santana guest verse and an introduction to NOE AKA Jay-Z Jr. It’s quite uncanny how much NOE’s voice and style resembles a young Sean Carter. When Noe’s solo track “Hustle” comes on after “Splash” you almost feel like you found some unreleased tracks from “Reasonable Doubt.” Unfortunately, NOE’s resemblance to Jim Jones’ number one enemy overshadows any lyrical skill the Baltimore native possesses:

“Black Phillip Drummond, pent house coming
Lawyers still dealing with last year’s summons
Shitting on the city, scattering the dust
Sheik with the Burberry padding on the cuff
Pounds of that hot quinine and bonita
A pessimist, with a couple nines on the peter
Panning, I became a G without planning
I became a god without God understanding
Me and my man in a Pakistani store
Laying prayer rugs in a Pakistani floor
Then talk Turkey, points on the dollar
How to quote a price and get a million and a swallow”

The rest of the Byrd Gang family also fails to leave much of a mark. Mel the Matrix’s gruff voice is wasted on generic lyrics. Sandman doesn’t get enough appearances to leave an impression either way. With Freakey not appearing once and Chink Santana on the beats, this leaves Jim Jones as the most gifted rapper of the clique.

The lack of distinct lyrical talent doesn’t mean there aren’t some bangers to be found on the album. What “Splash” lacks in catchiness it makes up for it by not being the typical sound you’d expect on a lead single. “I’m The Man” attempts to be the type of slow-moving street track Jim Jones has made famous and generally succeeds. “Only 17” finds Chink diversifying his style as he drops a funky track that has a little west coast boogie to it. The best track is the one with the worst title, “Oopsy Daisy.” Despite using a phrase one wouldn’t expect on a gangsta rap album, the crew comes through with a heartfelt track:

“Oopsy daisy, daddy went and threw me up
Then he let me hit the ground
I’m a gangster, I’m a bad man running wild
In the heart of these streets,
I got plenty love, from niggas who can understand
I’m a full grown man
But I love who I love, and keep all my money right
And that’s the Byrd Gang plan”

This track is followed by “Heartbeat” which is a decent R&B/Electro inspired track. “ByrdGang Money” also leans towards the catchy, especially with the 50 Cent inspired hook.

Overall, “The Album” isn’t much different from any other Byrd Gang project I’ve come across. The production actually suffers a bit due to the lack of beat jacking and Chink Santana’s safe but unspectacular approach. Jones was never a lyrical king, but with so-so beats his verses are much less appealing. The rest of the crew brings mixed results and does little to avoid sounding like all the other NY mixtape rappers out there. NOE’s Jay-Z impression, while completely unintentional is funny given Jim Jones’ documented issues with Sean Carter. I wasn’t familiar with Stack Bundles or Max B’s material, but given the buzz they both created on the mixtape circuit (and the two tracks featuring Stack) I would assume both of them would have made positive contributions to the album. It’s not that Mel the Matrix and Sandman are horrible, but they don’t stand out. Having an in house producer in Chink Santana is a step in the right direction, but his production lacks the “it” factor to give the group some hits. Freakey is noticeably MIA from any credited appearances despite being featured in the photos and “Thank You” section. Basically, there’s a lot of potential here, but it hasn’t been fleshed out yet. Chink Santana shows signs of being able to produce a hit, but isn’t quite there yet. Shyne has proven that sounding like a legend isn’t a death sentence, so NOE isn’t a lost cause. Mel and Sandman would probably benefit from a heavier mixtape presence just to gauge how talented either man is.