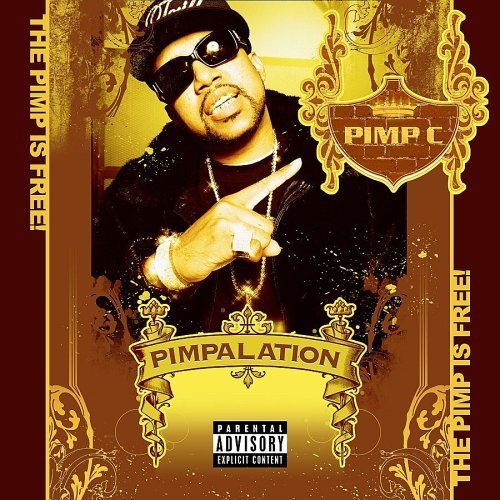 I’m so glad Sweet James Jones Stories” album in 2005 – I guess he had a good work release program! Finally released from prison just in time to celebrate New Year’s Eve, Pimp C had a fresh start and the chance to reunite with his partner Bun B for a long-awaited U.G.K. reunion album in 2006. That’s still pending but in the meantime Pimp is anxious to put out some new tunes, and the Rap-A-Lot release “Pimpalation” is the result.

Now to explain a little bit, the title “Pimpalation” is a portmanteau of the words “Pimp” and “compilation,” which would seem to imply that Pimp C merely compiled together a bunch of tracks by his favorite Southern rappers and put his stamp of approval on it. It’s safe to say this album is more than just another “Best of the Dirty South” record though – this is a Pimp C album. The “compilation” aspect is to be found in the fact this is not a Pimp C SOLO album. Pimp C did pick his favorite Southern rappers to be on this project but he’s not simply showcasing them, he’s rapping WITH them, resulting in songs like “Pourin’ Up” featuring his homey Bun B and popular (albiet often annoying) rapper Mike Jones:

Pimp C: “Grippin grain, switchin lanes
Sellin cocaine outta candy thang
Jammin Lil Wayne, gotta trunk of bang
Cause I’ma +Hot Boy+, like a hot flame
And my hoes pay me, just like Baby
That’s the only way they can lay me
Niggaz shoot slugs but they ain’t graze me
They want Sweet Jones be pushin daisies
But you slow and lazy and you can’t fade me”

Mike Jones: “Uh! I’m comin out in that candy thang
Eight carats in my panky rang
Drop the top in the parkin lot so y’all can see where the Desert swang
Candy paint what I’m flippin on
84’s and vogues what I’m tippin on
Momo woodgrain I’m grippin on.. grippin on..”

Bun B: “When I pull the slab out and hit the block
Wit them 4’s and vogues they clankin out
When they trunks pop, drop the top
Don’t be surprised if you go in shock
With them neon lights, candy paint
Belts and buckles across the back
Don’t disrespect or call this a Cadi’
Maybe this mo’ than just a ‘llac”

To be perfectly honest the poor formatting and small print of the liner notes inside this CD make it hard as hell to read who produced the track, but the bottom line is that it bumps and thumps and you’ll enjoy cruising around to it. The same can be said throughout this CD for songs like “Working the Wheel” featuring Slim Thug, “Bobby & Whitney” featuring 8 Ball, “Cheat on Yo Man” featuring Mannie Fresh and Suga, and even a classic track updated for the present day in the form of “Havin’ Thangs ’06” featuring underrated storyteller Big Mike, who ironically can relate quite well to Pimp’s past incarceration:

Pimp C: “It’s really goin down in the God damn South
Young thugs poppin pussy with them golds in their mouth
Young boys comin up, layin it down in the cut
Never fallin in a rut cause life was made for us to strut”

Big Mike: “From CD sales to jail cells
From diamonds that shine to eatin slop straight up off a chow line
From walkin that fine line uhh, to 12 jurors decidin mine
From bein free, to bein confined
From bein loved, to bein despised, many times I cried
For not allowin that bullshit to slide”

As either a Pimp C album or Southern rap showcase “Pimpalation” would work very well, but instead the album turns out to be the best of both together with a sum greater than the individual parts. As a bonus “Pimpalation” comes with a bonus “Chopped & Screwed” disc by that king of slowed up beats himself Michael ‘5000’ Watts, so it’s really hard to go wrong with this album. The only way you could not like would be if you’re not a fan of Pimp C or of hardcore Southern style rap, and if that’s the case maybe you should pick up the “Pimpalation” anyway just to find out what you’re missing out on.