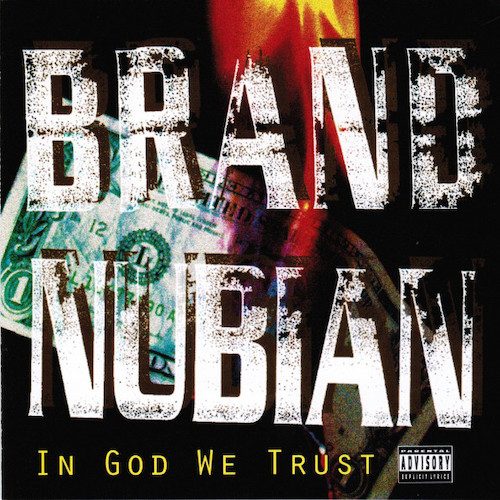 In God We Trust

Brand Nubian :: In God We Trust

“The only way I’d fall is if I got fat and lazy
and I won’t, cause I work real hard” – Sadat X

Brand Nubian was in an awkward position in 1993. Their debut album “One for All” three years earlier was widely hailed as a hip-hop classic, but founding member Grand Puba quit in 1991 to pursue a solo career after the all too familiar “creative differences” that result in the end of many rap groups and rock bands. Puba was the recognized top dog lyrically and musically, leaving rap fans to wonder if Brand Nubian could continue without him and whether Sadat X or Lord Jamar would be able to successfully fill the void if they did.

The surprise appearance of the Diamond D produced “Punks Jump Up to Get Beat Down” in 1992 assured fans the group would indeed continue. Flanked by DJ Sincere, who stepped in to fill the roll vacated by DJ Alamo (who left alongside Puba), Brand Nubian proved just as capable as ever over classic samples from Lou Donaldson and the Rocky soundtrack. The song was not without controversy though then or now. Radio and video edits cleverly disguised the controversial Sadat X line “fuck up a faggot/Don’t understand their ways and I ain’t down with gays” but that was hardly the only problem. The D produced single that most listeners are familiar with is not found on the first edition of the album in North America.

“In God We Trust” continues the Five-Percent Nation teachings from the group’s debut and makes it even more explicit than it was previously by including a speech from Louis Farrakhan. The “God” in the album’s title is the black man, divine in his own creation, and not a “mystery God” in the sky who is unseen and omnipotent. The song “Ain’t No Mystery” further elucidates these points.

The good thing for the “eighty-five percent” is that you don’t need to inherently believe in the Five-Percent teachings to enjoy the beats and the rhymes of Brand Nubian, but understanding those beliefs does help one to understand the wisdom being shared and the jewels being dropped. It also paints a broader picture for singles like “Love Me or Leave Me Alone” which to some is a misogynistic track. That’s certainly one way to interpret what Lord Jamar is saying on the song.

“You don’t want me to bone another chick
Quick to claim my name and my dick
But when I tell you get off the swine and get refined
You act like you’re blind and you lost your damn mind
See I’m not the kind to let a woman run it
How my man Rick say it? ‘I Shouldn’t Have Done It’
is what I’d be saying if you was runnin the show
No hoe, there’s no gold, the G-O-D know
the time on the Sun and the Moon and the Stars
Dance to the tune of Lord Jamar”

It’s worth noting though that when he says “get off the swine and get refined” he’s referring to the Muslim practice of not eating pork, and those religious tenets carried over to the Nation of Islam and various subsidiaries and related practices. Now he probably doesn’t need to call a woman a “hoe” to make the point that he wants a mate whose beliefs adhere to his own, but you can also understand him wanting a partner who is not going to eat bacon, pork chops or ham sandwiches. It may be a crude statements but as with the majority of “In God We Trust” the lyrics are informed by them deigning to practice what they preach, to borrow a phrase from Christianity. Of course this is still hip-hop and then as now rappers don’t take no shit, so “Pass the Gat” is a warning not to cause them use a weapon in self-defense.

The stridently homophobic tendencies of Sadat X show themselves again on the track with the quip “Shoot the faggot in the back for acting like that” in the first verse. It’s not as though he’s unique in this regard particularly for early 1990’s rap artists. “Faggot” and “pussy” were almost ubiquitous slurs and even today rappers are criticized for their choice of language. Ignoring such words is not the answer nor is censoring anything hateful — that just avoids the discussion instead of addressing the topic. It is perhaps easier in hindsight to understand that rappers were under enormous pressure from both their fan base and the labels selling their music to promote a strong air of male confidence, so that the largely straight male audience would relate to and enthusiastically support them by purchasing the records, but it led to a lot of gay bashing as a shortcut to portraying what a strong man was.

In retrospect these sentiments should not be appreciated in a vacuum as though it’s sealed off from the harm that comes from that hate. A more appropriate target of their wrath though can be found on the song “Steady Bootleggin'”, addressing what was at the time an already simmering take on street corner merchants selling counterfeit copies of the hottest rap albums. Artists already get an unfairly small cut of the profits from major record labels, but rappers got NO cut of any bootleg sales, and this led both Jamar and Sadat to threaten a serious ass beating of anybody hawking bootlegs of their work. “Everyone’s got problems, selling my tape ain’t gonna solve ’em”.

The fact that this and so many of the other songs on “In God We Trust” still hold up today is remarkable; perhaps more so remarkable given the complete absence of Grand Puba from the proceedings. From the tour narrative “The Travel Jam” to the police wickedness of “Black and Blue” and the Jamaican riddim influences of “Black Star Line” featuring Redd Foxx, there’s a whole lot to appreciate about this album. In time Puba’s absence would take a toll on the group and ultimately cause them to reunify in the face of dwindling sales, but for a while it felt like they were just as strong as a duo as they had been as a trio.