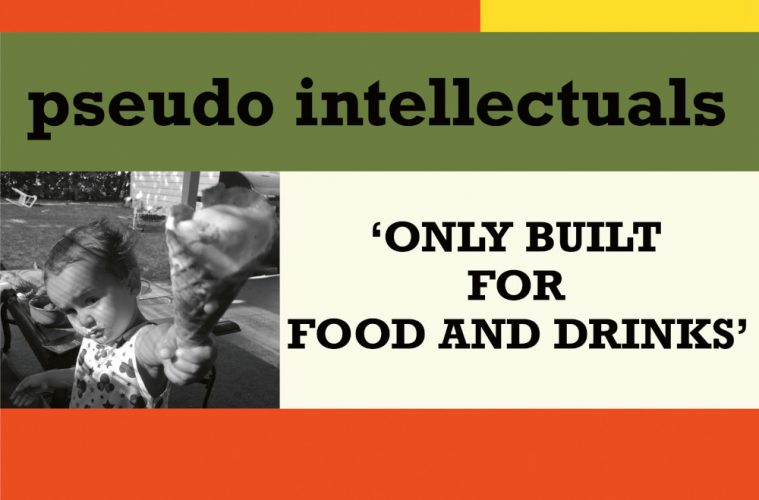 Pseudo Intellectuals :: Only Built For Food and Drinks

This album has been my first exposure to the Pseudo Intellectuals, and what initially stood out about it was the album title. Not only is it a send-up of Raekwon’s classic 1995 debut, but it’s also a crafty juxtaposition to the group’s name. The Nickel City trio consisting of Tone Atlas, Nick Zero, and DJ Cutler is the second group to emerge from Buffalo’s long-dormant hip-hop scene. But unlike some of their fellow hometown emcees (Griselda, Ché Noir), the Pseudo Intellectuals keep it simple with an MPC2000, turntables, and a mic. At 14 tracks and 33 minutes, perhaps it was too simple. The beats are jazz-sampled and the lyrics seem just as improvisational as the genre.

The nimble “Porkchop Sandwiches” seems like a tongue-in-cheek ode to veganism. It reminds me of MF DOOM’s food concept on “MM…Food” (in fact, DJ Cutler scratches in a sample of “Beef Rapp” in there), and most of the lyrics follow this same seeming stream-of-consciousness format. “Uffalo Ills” consists of loose rhymes about the economic conditions of their home city with a wistful jazz sample. “Billy Pilgrim Stuck In Time” gets more points for the beat as opposed to the rhymes. The DJ cuts, the instrumental samples, and the hard dusty drums garner more attention than the lo-fi sounding vocals. “Zillion Airs” makes up for it with the wordplay, rhyme schemes, and the ATCQ-influenced beat.

Of the 14 tracks, 3 of them are skits. “Opening Remarks” is the album’s intro while the latter two, “Records Get Sold” and “Fresh Fish”, seem like album filler making statements about the group’s stance on commercialism and diets, respectively. “A Bright Cold Day In April” is a play on the opening sentence of George Orwell’s “1984”. The lyrics have a theme of paranoia about them and the beat has a playful, organ-sampling boom-bap production courtesy of Tone. Production-wise, this the most fun beat that the album has to offer at this point:

“Reclining Pleather Seats” takes imagery from movie theaters as an analogy for everyday life and contains well-put rhyme schemes like “Beating the drum, bleeding red, white, and bluish / Chewing on gum, breeding dead, White, and clueless”. “Welcome to Sophia’s” has the jazzy sound of a commercial and, just under two minutes, you’d think it was a song, but it’s simple a musical interlude. The rapid rhythmic pace of “Charcuterie” has the group rapping about the creative process of rapping. The final three tracks are “Pseudomocracy”, which rails against political bullies; “Wht Ppl”, which contends that poor White people are manipulated that race’s rich elite; and finally “Social Justice, Warrior”. If you’re looking for deep, intellectual raps, you won’t find them here ironically. But if you’re looking for escapism through a lyrical stream of consciousness, then you’ve found the right album.