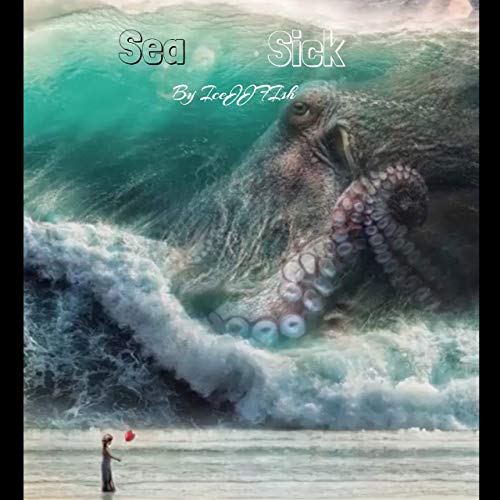 Despite having the ominous warning that he “fails to meet the notability guidelines” of Wikipedia for almost two years, Daniel “IceJJFish” McLoyd has managed to avoid any calls for deletion that would fast track him to the dust bin of history. I attribute his survival entirely to the viral nature of “On the Floor“, a music video featuring attractive females and ATROCIOUS singing so infamous that it has been viewed over 75 million times. If the cliche “there’s no such thing as bad publicity” holds any truth, IceJJFish may be exactly who the saying had in mind. Given his viral “hit” is over six years old though, I felt it was only fair to look at a more recent release like his 2019 album “Sea Sick” and find out if he had improved in the interim.

Let’s build a compliment sandwich out of his “I Want U” video. His eye for attractive models to appear in his content has clearly not diminished, his hairline and sideburns look to be fresh trimmed and sharp, and he’s clearly got a good eye for shooting locations as the nature setting is pleasant. As he is the owner and sole proprietor of IceJJFish Entertainment all of these responsibilities fall on him, and as any rapper can tell you it’s not the easiest job in the world to run your own business. A major label may take a big cut of your earnings, but they also (in theory) take a lot of the weight of promotion and distribution off and leave you to concentrate on being an artist and a superstar. That can of course be hella shady in practice but that’s a discussion outside the purview of this review.

Now for the filling in the sandwich — IceJJFish is still a TERRIBLE singer. If you can last more than five seconds into “My Friend” it’s because you’re either incredibly high, absolutely laughing your ass off with YOUR friends, or BOTH. Let me slap a slice of nicely toasted bread on this by saying that he’s not trying to disguise that fact. He’s not covering up his vocals with heavy amounts of AutoTune or layering it in tons of echoing reverb. It is in fact likely that “Sea Sick” is bad on purpose. (Porpoise?) If you’ve become infamous for being awful and actually made a career out of it, would it behoove you to get vocal coaching, practice regularly, and try to improve overall? No! It would destroy the very thing that made you a “star” in the first place.

Unfortunately songs like “So Sweet” aren’t hampered solely by the sounds of a cat in heat being swatted with a broom. IceJJFish’s lyrics are genuinely sentimental but like a cheap diet soda leave an unpleasant aftertaste. “Baby girl I’ll never ever let you down (let you down)/baby girl I’ll always make you smile (make you smile)/Baby you look so sweeeeet/baby girl put that body on me”. Once again I’m forced to acknowledge that being mawkish is part of the presentation, so writing thoughtful or seductive come ons would be self-defeating, but he succeeds in his low ambitions to an exasperating degree.

There is some good news here — “Sea Sick” is just under 26 minutes long. If you intend to subject yourself to the IceJJFish experience out of curiosity or for the sheer comedic value, you can get through the whole thing fast. As much as I’d like to tell you he is good for a laugh, the novelty value of his approach wears off quickly. Being intentionally bad just to garner attention still means you’re making awful music. We only need one artist each generation whose prowess is defined entirely by his ineptitude, and for all of our sakes I hope IceJJFish is that one. Here’s another cliche to close the review — “success breed imitation” — but imitate IceJJFish at your own risk.