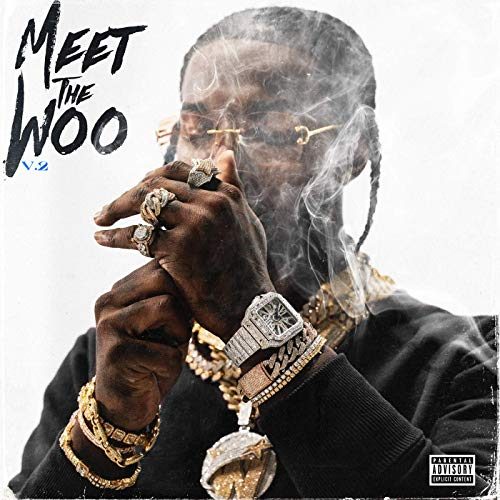 It’s getting really old to have to start a review with a Rest In Power but here we are again anyway. Bashar Barakah Jackson better known as Pop Smoke was only 20 years old when he was shot during a home invasion in Hollywood Hills, dying from a single round to the torso. The Brooklyn born rapper from Canarsie had only signed his record label deal last year after the single “Welcome to the Party” off his “Meet the Woo” mixtape got him attention from all the right people. “Meet the Woo Vol. 2” came out less than two weeks before the rapper was gunned down, which makes a song like “Invincible” all the more unnerving in hindsight.

Pop Smoke was certainly feeling himself. “I feel invincible/It’s a hundred niggaz in the spot/I’m walkin through ’em/It’s eighty-five just to walk on/I don’t talk to these niggaz/cause a lot of these niggaz be corny”. Unfortunately in this life bragging that you are invincible doesn’t tend to play out well. There’s always someone willing to test your mortality out of jealousy, envy, greed, or just for the fuck of it. Rrappers ARE expected to project the air of invulnerability to their fans though. Tupac Shakur used to brag about how many times he had been shot and survived. 50 Cent joked about it in a skit on Robot Chicken, saying “bullets are like food to me“. It’s not a coincidence that I’m bringing up Curtis Jackson. The Queens emcee had worked with Smoke several times and was heard on the “PTSD” remix last year.

Smoke may have had reason to feel “Invincible” even before he blew up on the rap scene. As a young hustler he had already beaten the rap on multiple charges, with the worst sentence he had to face being two years on house arrest. Since blowing up with “Welcome to the Party” his collaborations with producer 808Melo led to his music being called NY Grime, and Melo is all over “Meet the Woo Vol. 2” on grimy-ass tracks like “Foreigner” featuring A Boogie Wit Da Hoodie.

No matter how much his sound mimicked his UK counterparts, the distinctly New York roots of Pop Smoke still came through on tracks like the Melo and Swirving produced “War” featuring Lil Tjay. I noted last year that Tjay had the look/sound of a “teen heartthrob”, and he’s the perfect counter balance for the darker and more aggressive Smoke on the track.

The comments section of such clips will now look like the Staples Center did after Kobe Bryant’s passing — grief, denial, shock and heartbreak pouring out of every word. The worst part to me is that Smoke had only JUST broken out. Like XXXTentacion before him Smoke wasn’t even old enough to legally buy alcohol yet when a bullet shortened his life. We can only speculate on just how far Smoke would have taken the sound he had become identified with on his releases, but on the WondaGurl and Melo produced “Dreaming” he was definitely picturing a life where he enjoyed the fruits of his labor. “I’m the one they want to meet (Pop Smoke)/They know I’ma bring the heat (Pop Smoke)/They wanna fuck with the team (Pop Smoke)/Bad bitches, that’s my thing (Pop Smoke)”.

As sick as I feel to have to write about Bashar posthumously, it’s even more disheartening to have to say that I’m at best ambivalent about his music. The positives are certainly there. Pop Smoke created a style that stood out from his contemporaries, he was rapping as opposed to mumbling, and he had a smoky vocal tone befitting his nickname. In fact I’d go so far as to say he sounded about 20 years older than he was, which was why I was so shocked when I learned his real age after his death. As for meaningful depth to his bars, humorous “press rewind” punchlines or emotionally resonant stories, I regretfully must honestly say he didn’t grab me in any of these categories. As a lyricist he was “just there” — not terrible, not brilliant, just okay. Does he show future potential on “Meet the Woo Vol. 2“? Yes. Absolutely. Now we’ll never get the chance to find out what it was.