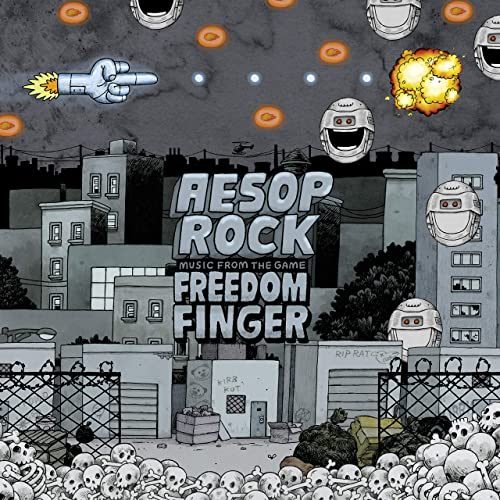 I’m sitting here cursing myself out for not knowing that Aesop Rock composed the music for an insane shoot-em-up video game called Freedom Finger. It sounds like exactly what a hardcore hip-hop nerd/video game junkie like me would be into; yet somehow, no amount of reading Kotaku or Polygon put this one on my radar when it dropped last fall. Maybe Aesop Rock isn’t an artist their writers or editors aren’t into. Yeah, that’s why. Oh wait — Nolan North (Nathan Drake, Deadpool, etc.) and John DiMaggio (Bender, Jake the Dog, Dr. Drakken) did voices for it. There’s NO EXCUSE for this being off the radar for me or for them. Therefore I’m going to assume the fault is entirely mine and that they did cover Freedom Finger at some point, and I was just interviewing fighters that week and missed it.

Every part of this trailer makes me smile save for the fact they mentioned Tobacco from Malibu Ken for his musical contributions and not his partner-in-crime Mr. Bavitz. I don’t get it. Ultimately it doesn’t matter though since “Freedom Finger (Music from the Game)” is something you can still get for $5.99 to enjoy all of Aesop’s musical and lyrical contributions to what looks like an insanely funny shooter that both pays homage to and parodies everything from Contra to Ikaruga. You could spend about $10 more to get the game and all of the artists featured, but if you really want the stand alone Aesop Rock experience and you’re not a gamer, this is your ticket.

Having not yet experienced the game other than its over-the-top trailer, it’s difficult to imagine how songs like “Play Dead” would be as enjoyable while trying to dodge rapidly flying bullets and simultaneously grab enemies with your fist-shaped ship to smash things. Aesop Rock is a notoriously lyrically dense artist, which makes him an artist with a deeply devoted cult following and an equal number of haters who find him to be completely inaccessible. Even his ardent supporters would be hard pressed to pay attention to the bars of “Drums On the Wheel” while dealing with the frantic action seen in the accompanying video.

If you take the time to examine them in-depth though (always a worthwhile exercise for this artist) you’ll see that he cleverly combines references to the gameplay for Freedom Finger while exercising his own inexhaustible stockpile of lyrical grenades to blow up the beat.

“I been dropped off in this mosh pit
Instead of locked into one orbit
Knock knock, fall back
Or this cockpit is my coffin
Boss levels I’m doomed to repeat
New dance called ‘Do you read me?’
It evolved as if beyond the yonder mantra
What’s none ping in my transponder
What’s what the copy y’all plan to conjure
Been handed back to y’all unresponsive”

It’s at this point though that it becomes more obvious how “Freedom Finger” the album could fit into Freedom Finger the game. The next three tracks are instrumental versions of the first three, which a clever game designer could use to interchangeably offer you more of Aesop Rock’s rapping during the calmer moments, then switch to an instrumental to help you focus more during intense action. Of course it could be exactly the opposite too — they might just throw a deeply dense rap at you to make progression even harder and make you keep trying a level over and over. I’ll just have to justify spending $15 as a business expense to find out.

The final cuatro of tracks are so short that I can only imagine they are for cut scenes, although each one is dope enough that it could be looped into a full length song with Rock’s raps quite easily.

If you’re already a fan of Mr. Bavitz then “Freedom Finger (Music from the Game)” will not disappoint, save for the fact that you’ll want more the 23 minutes of dope included here to inject into your ear canals. Thankfully he has a large catalogue of music already so that’s really not a problem — this is more like a bonus for the fans. A bonus LEVEL perhaps. Yeah. This is the Minus World of rap albums. Do a backward jump through the wall and go down the pipe like Alice and the rabbit hole. Eat the mushroom and grow big. Then tell Mario he really needs to lay off the psychedelics for a while.