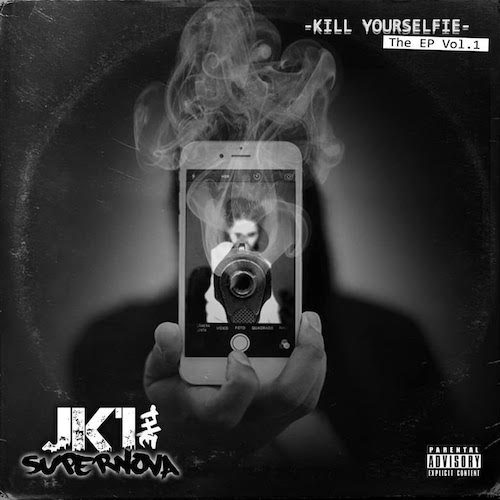 JK1 the Supernova is one of many hip-hop artists from up north who’ve dedicate part of their craft to maintaining that traditional boom-bap sound of New York hip-hop. A native of Brooklyn, JK has established himself as a dual threat in that he’s both an emcee and a producer. In 2019, he released his debut album, “Hip Hop Doesn’t Love You Back”, a critically acclaimed body of music that also serves as a high point of his perseverance: Nearly a year prior, his wife lost her life to breast cancer, so JK channeled his energy into his music as a result. His latest release, “Kill Yourselfie The EP Vol. 1” builds on the themes of this debut while retaining his signature sound.

Little over 20 minutes and 8 tracks in length, JK handles the production in its entirety. As an emcee, his voice and flow are both street-honed. He doesn’t use wordplay or punchlines in his rhymes, his concentration is mainly on the content. His productions are sampled flips of break-beats and vintage sounds. To start things off, “Talkin’ Head” has JK rapping over a jazz sample with a very noticeable piano riff. The soundscape takes a dim turn on “Captivity (Down By Law)”. On a skeletal level, it’s a heavy drum and bass track wrapped in the flesh of a sampled score comprised of some dark woodwind instruments. The second-to-last track, “Swears”, bears similar production, but isn’t as foreboding.

DJ Jake Case handles the scratches on the songs and seems to favor slipping in vocal samples of Wu-Tang Clan lyrics to drive the point of JK’s lyrics home. JK also enlists four other guests for assists. The first of which is Protégé on “Cecil”, which makes use of a familiar, but grimy sample for them to rhyme over. In between the next feature, JK has his lyrics take the conceptual route on “Money Said (Figures)”. Over an R&B sample, JK waxes lyrical about the different forms which money can take and the behavior it accordingly induces. He continues in the conceptual direction on “Helpless” where both he and Irv the Rapper talk about the “stop-you-in-your-tracks” feeling caused by the sensation of “love at first sight”.

He creates a melodic beat on “Out of Mind” featuring Maddsonn while closing out the EP with the very short “4th of July”, which has a boom-bap beat, but no raps. Instead it’s a singing track courtesy of the album’s executive producer, Erin “Red E” Kabir. Though the album’s short length leaves more to be desired, it’s satisfying, nonetheless. Additionally, though most of the tracks hit harder than the others, “Kill Yourselfie The EP Vol. 1” contains no filler.