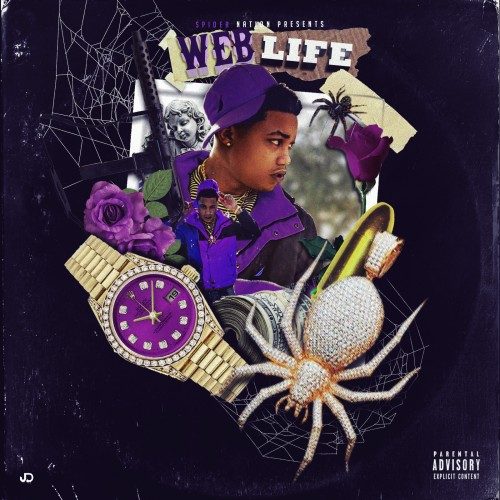 TEC (also T.E.C. on some releases) is a Baton Rouge, Louisiana artist who by his own account spent a decade grinding before finally starting to achieve wider recognition in the late 2010’s. After releasing an album with friend and fellow Baton Rouge rapper Maine Musik, TEC branched out for a series of “Web Life” albums, starting with this first volume in 2018. I had intended to review the most recent “Web Life 3” going in, but at the last minute realized I’d be better off going back and getting a little more familiar with TEC and where he came from before diving into his more recent work. If we’re going to deep dive though here’s a quick look at his “Life I Choose” music video from WAY back in 2012.

One thing I have to say about TEC off the top is he’s consistent. He was an AutoTune rapper back then, he’s an AutoTune rapper on “Web Life” and I have no reason to think he’s not still one today. His tracks reflect a mixture of anxiety and nihilism seemingly brought on by dealing in the streets, though if he’s been rapping for a decade plus “whipping the yay” as he raps about in “Can’t Sleep” should be a necessity. Still it’s believable to say the thought of being snitched on by homies, set up by the cops or shot by his rivals would cause many a sleepless night.

When TEC isn’t in need of some melatonin and lo-fi hip-hop to chill to, he’s singing about his desire to commit “Bloody Murdah” in a robbery gone wrong — or perhaps right. “If I hop out then I’m rippin/Don’t give a bitch no pity/So don’t say shit, I’m impatient, so whatever you got let me get it!” It seems that whipping up rock in the Pyrex pot is just one of many hustles for TEC to get his ends regardless of who gets in his way.

It’s undoubtedly the regional accent making me say this and it’s just a coincidence but when TEC is rapping as opposed to singing he sounds more like New Orleans rapper Juvenile, although without the latter’s deep intonation and commanding presence. The fact I can even sense it on tracks like “Bloody Murdah” though makes me want to hear TEC rap more and sing less. Throughout the 35 minutes of “Web Life” though TEC sticks to his “Business Plan”, bragging that he just “closed a deal for a million” and then doing donuts in the new whip he bought with the funds.

“Bitch I feel like Rockefeller reincarnated” brags TEC, before rapping about his desire to own a NBA team of his own. It’s good to have goals, and TEC has certainly set his sights sky high, so I commend him for dreaming big. If it was easy to do we’d all be Mark Cuban or Shawn Carter, but if was impossible to do those two men wouldn’t exist. The fact he has distribution through EMPIRE suggests he’s doing something right, as does the fact there are two volumes of “Web Life” after this one and presumably more to come.

I regret then that I must to some degree damn TEC with faint praise. The production is aight. It’s not un-listenable, but there aren’t classics here I’m dying to come back to. The singing is aight. He’s not any better or worse than the majority of his contemporaries. The lyrics are (you guessed it) AIGHT. He can tell a story well, and even with a strong Louisiana sound, it comes through clearer than other mumbling crooners — it’s just that it’s nothing you haven’t heard said and done before. “Web Life” shows some potential for the future, so while I do look forward to reviewing later albums, I can’t say this one is a must own unless you’re a die hard fan going all the way back to his “Life I Choose” days.