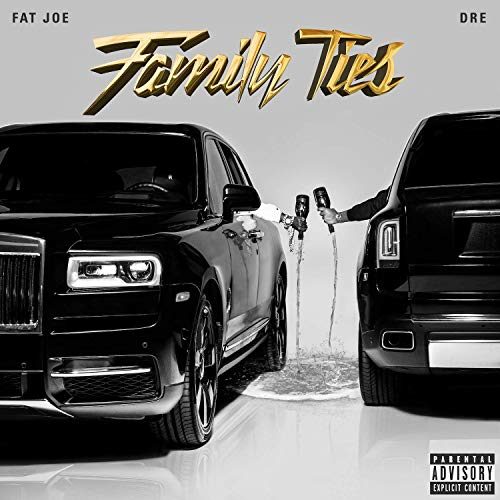 Every month I do a Patreon exclusive poll for supporters of the website to voice their opinion on what they’d like to see reviewed. January’s poll pitted new albums from Atmosphere, Fat Joe and Iggy Azalea against each other. For the first two it was their first time being polled while for Azalea it was her second attempt. Perhaps it’s a measure of how public perception of Azalea dropped in the late 2010’s that she received NO VOTES. Clearly our readers aren’t that interested. She won’t be polled again. While Atmosphere leapt out to an early lead, Fat Joe crept up slow and only lost by one vote.

Even though “Family Ties” didn’t ultimately win, the fact he polled so strongly against an underground rap group convinced me to ultimately take a closer look at Fat Joe’s album. In fairness if Fat Joe had won in a vote that close I probably would have said the same thing in reverse about “Whenever” but whatever. The last “solo” album from Fat Joe was back in 2010, but he has never officially retired from the game. As recently as 2017 he did a collaboration album with Remy Ma, and in between his podcast for Tidal and other projects he found time to record “Family Ties” with Dre. No — not Dr. Dre (nor the other Doctor Dre). This Dre is from Cool & Dre, the production duo behind some of your favorites songs for the last 20 years. Those hit making skills are on display for the track “YES” featuring Anuel AA and Cardi B.

The song owes much of its swag to the Hector Lavoe and Willie Colon song “Aguanile” from 1972. It feels authentic for a salsa track from Puerto Rican/Bronx legends to come from Fat Joe, who has always been proud of his own Puerto Rican/Bronx roots. Aside from that there’s not a stunning amount of depth to the song. “Yes! Ass up, face down” intones Joe repeatedly, proclaiming “the pussy like voodoo, santeria“. I was always under the impression that practitioners of that particular religion didn’t like it being called “voodoo” but I’m not expecting political correctness from a raunchy 2 Live Crew-esque song in the 2020’s let alone one that features Cardi B.

As for collaborating with Dre it may surprise you to know that he (nor Cool & Dre collectively) didn’t produce the entire album. “Hands on You” and “Drive” were handled by Hitmaka, with additional production by Cardiak on the latter. The rest of the album does have Dre producing or at least co-producing the music, but this collaboration is Dre’s chance to emerge from behind the boards and showcase his own lyrical skills bouncing off Joe’s.

“Forgive me, I’m a n-gga out the projects
From where they pick out all the NFL prospects
Either you rich or you poor, a simple concept
So cooking up a tote and a rocket with some progress
But these days, you gotta watch what you post
Trying to speak truth or power get you shot like Ghost, whoa
But fuck it, I’m a n-gga out the ghetto
where when all else fails, you start hustling the Holy Ghost”

I have to confess that I was pleasantly surprised by the thoughtfulness of his rhymes and smoothness of his delivery. I wouldn’t have predicted going in that Dre would be even slightly nice on the mic. There are exceptions like Pete Rock, Diamond D and of course Dr. Dre who are way above par at production and better than average at rapping, but for every Evidence who is excellent at both there’s a legendary producer like DJ Premier who you’d NEVER want to hear rap. Preem’s gruff voice makes for great intros to tracks, but after a few bars you’d be like “man get back behind the boards where you belong”. Not Dre. Maybe being in the studio that much making hits for everyone else rubbed off on him, or maybe he was just keeping his desire to grip the mic secret for all these decades.

While “Heaven & Hell” sources the same material as the Wu-Tang classic “Tearz” it’s hard to be mad about it or this collaboration in general. Doing collab’ albums seems to be good for the not so aptly named Fat Joe in general. He’s lost a lot of weight over the years, but as the veteran emcee enters his fourth decade in the game, it’s also good he doesn’t have to carry the weight figuratively or literally on a full album. With the amount of friends he’s made over that time it’s only natural to hear him and Dre sharing the billing with artists like Eminem and Mary J. Blige on “Lord Above.”

The most recently released single from the album is “Deep” and the accompany video was filmed like a mini-movie. Even at his slimmer size, Joe still raps about living a Fat life with the kind of panache you expect from Rick Ross. You either love it or you hate it but he does have a flair for telling good stories when he does it.

“There’s a war going on outside no man’s safe from
Shit’s hard when you at odds with day ones
I fucked thirty bitches, it ain’t feel the same
House filled with dirty dishes, even took the maid
I had you at them Heat games in them seats, man
You be like ‘We could trip a referee bae’
I’m like, ‘Ma you got to chill, pick that bag up off the floor’
Bitch, act like you been here before”

So let’s sum it all up like this. There’s about 40 minutes of slickly produced tracks on “Family Ties” with the kind of bars you’ve come to expect from Joe but never expected from Dre. It’s true that standards came down heavily in the late 2010’s as “mumble mouth” rappers took over the charts, which makes hearing actual bars from a veteran emcee let alone a producer seem more impressive than it actually should be. In truth Joe’s far from a GOAT in terms of his bars, but he is unquestionably a legend just for his longevity and adaptability, surviving in a hip-hop world where less savvy players had careers shorter than NFL players. This album isn’t going to change the game, but like any good Joe album, it knows how to play the game well.