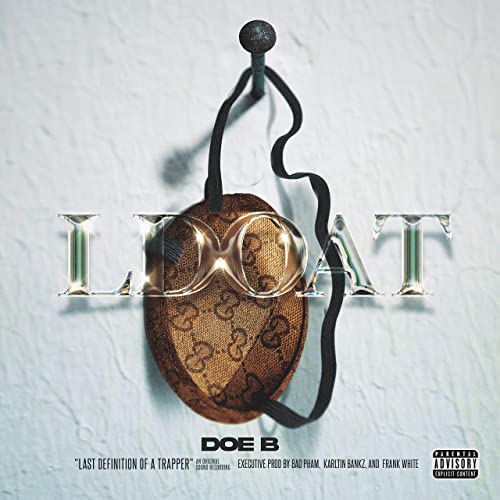 The Last Definition of a Trapper

Doe B :: The Last Definition of a Trapper

Up-and-coming rapper Doe B was fatally shot on December 28, 2013 at Centennial Bar and Grill in Montgomery, Alabama along with two innocent bystanders. Three years ago one of the assailants was sentenced to 85 years for his role in their deaths. Throughout it all posthumous mixtapes kept his music in the mix, but over half a decade after his passing, “The Last Definition of a Trapper” is his first OFFICIAL album. Had he not been gunned down though it’s likely this would have happened a whole lot sooner, as T.I. pegged Doe B as a future star and had included him on several Grand Hustle projects. Like so many other tragic deaths in hip-hop we’ll never know just how big he could have been. We can only speculate by listening to what’s available from the material he made before he was gone.

“A diamond in the rough; I ain’t shinin just because
I shine for you and you and you my nigga I shine for us
I shine for all the ghetto children all across the world
Every corner sto’, every momma that’s on drugs
For every project building that’s still standing
Those section eight houses we still in ’em — real talk”

Doe B’s charisma is obvious from jump on “Diamond N the Rough.” His syrupy Alabama drawl reminds me of Rich Boy, albeit at a much deeper baritone and far easier to understand. I also appreciate the perspective he has about wanting to be a rap star. Doe B feels that his story is the story of everyone who grew up like he did, lived how he lived, but didn’t get their own chance to tell it on a record. I’m not saying it’s wrong per se for a rap artist to want to make money just so they can live good or even flaunt their success a bit, but to me Doe B seemed to have a grander vision of repping for his friends, family, loved ones and kinfolk around him.

That lends an unfortunate irony to songs like “Tomorrow” featuring Bankroll Freddie. Doe B wanted to be “breaking bread with my team” but he says in the hook that “tomorrow ain’t promised” in an eerily prophetic way. Freddie’s bars neither add nor subtract from the song — they’re just there. Even if Freddie is on that “team” there’s no doubt Doe B is the star of this show. Songs like “I Can Be That” featuring Tasha Catour & Dariauna Dior even had a slickness to them that would have made for crossover potential, although radio play would have required some significant censorship or an alternate take for the airwaves.

Speaking of guest appearances though there are a LOT on “The Last Definition of a Trapper.” That was probably inevitable given how long after his death this album came out. OJ Da Juiceman is on “2 Piece Special,” Waka Flocka Flame is on “World Is Mine,” Young Dolph is on “Hit ‘Em Up” and the aforementioned Rich Boy is on “Hardbody” just to name a FEW. It certainly does stretch the length of the album out, which if you wanted more bang for the buck was the best possible solution given what was undoubtedly a limited amount of vocals recorded by Doe to work with.

The bottom line here is I see the potential that Doe B had, even all these many years after his passing, let alone when he first laid the tracks down. I wouldn’t go as far as claiming he would have been one of the all-time greats in rap history, but he certainly would have been at the top of the field for rappers out of Alabama, a state not nearly as well represented in the game as some of its Southern neighbors. There’s certainly a comfortable niche he would have fit into easily with his swagger, accent, mild mannered delivery and generally outgoing persona. I can’t say I know Glenn Thomas the man the way I do his alter ego on “The Last Definition of a Trapper,” but I like what I hear of Mr. Thomas enough to wish he was still here doing it today.

Doe B :: The Last Definition of a Trapper
6.5Overall Score
Music6.5
Lyrics6.5