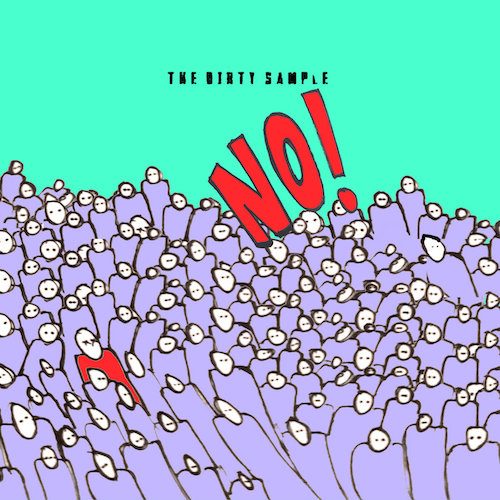 Finding a distraction during a quarantine/lockdown appears difficult only on paper. Despite the closure of businesses and social distancing, there’s still plenty to do. Some have caught up on sleep, others may be building their bodies, and some may finally be getting around to writing that great American novel. But for Calgary’s The Dirty Sample, he does what he does best: Make music. The Canadian producer/emcee has recently released “NO!“, an instrumental album and his first since his 2016 release “Pay Up”.

The album’s title reads like a personal rail against present-day conditions, both internal and external. But in any case, beat tapes are a welcome challenge to listen to. In lieu of lyrics, the music forces the listener to give up the reigns of control. The production on “NO!” is all sample-based. From the sound of how the beats are put together, they’re not necessarily designed for emcees to rap over. If anything, the album feels more like an improv sampling-session. Additionally, all of the song titles are contracted verbs.

Comprised of 17 tracks, the starting point is “Workin'”. When I see this title on a beat tape, I can’t help but to think of J. Dilla’s opening track from 2006’s “Donuts”. It’s soulful, if not a bit choppy. “Jumpin'” induces head-nodding courtesy of its looped guitar strings and bell samples. “Dummin'” lacks the same complexity. In fact, it’s simple, but sufficient with its drum & bass pattern and added keyboard samples. The Dirty Sample’s versatility shows on “Lovin'”, which is very atmospheric and upbeat, as though it was sampled from several ‘70s love songs.

The album’s second quarter begins with the psychedelic “Dyin'”, which has one of the least off-kilter, and more consistent, drum rhythms on the album. “Movin'” has a very relaxed sound courtesy of a manipulated flute sample. The first track that I can envision an emcee rapping over is “Tryin'”. Like all of the other tracks, it contains a movie dialogue sample to start it off. It’s also the longest track, clocking out at just under a full three minutes. “Killin'” is as ominous as it sounds. It’s dark, has a deep bass groove, screaming vocal samples, and a dialogue sample (“they come from the unknown”) that adds to the foreboding soundscape:

The Dirty Sample may have some “meh” tracks on here, like “Doopin'”, but he still creates interesting sounds elsewhere on the album. Take “Menacin'”: This is what Gary Wright’s “Dream Weaver” would sound like if it were put through a woodchipper and then pieced back together as the score for a back-alley scene in some 1970s crime drama. “Sittin'” is noteworthy as it is built from the same sample used by the Heatmakerz seventeen years prior in “Purple Haze” by Dipset. If the beat was re-worked for a rapper’s flow, it’d be doper. “Survivin'” is the first track that goes for over a minute, it’s actually closer to two-and-a-half minutes. It’s comprised of a menacing vocal sample, like something from a narrative comparing human and animal survival methods; melodic bass, and some DJ cuts which are more apparent in the second half of the track.

He goes for more vintage sounds in the final part of the album. “Lyin'” employs chopped high-pitched sped-up vocal samples until the beat eventually picks up with sparse piano keys. “Champin'” has a Muhammad Ali vibe written all over it, particularly with the “so bad I scare myself!” sample. The smoky lounge feel of “Stoppin'” is reminiscent of slow 1980s r&b with its airy echoing vocal sample while “Funkin'” is one of a few tracks where the title and music match: Horn samples and the bass coming together for a dope groove. Lastly, the outro “Travellin'”, is over two minutes, but feels like an actual song. One can hear the vinyl cracklings in the keyboard samples. Overall, “NO!” mostly delivers even with less than a handful of lackluster tracks. The highlight of the album is The Dirty Sample’s eclecticism and skill in his craft.