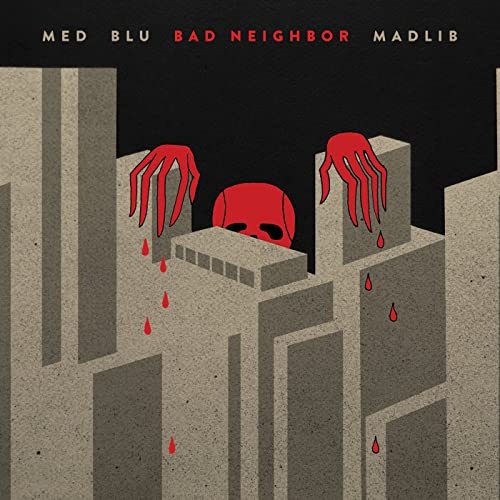 So we’re all spending more time at home these days. How do you pass the time to make it go by more quickly? For me one of those ways is digging around in virtual crates, looking for albums I missed or overlooked, trying to find those hidden gems worthy of discussing. Sometimes they turn out to be diamonds , other times cubic zirconias, but the dig is itself a worthwhile exercise regardless of the results.

I had my shovel in hand looking for treasure and wound up in Oxnard, California. It’s one of those places that doesn’t come to mind first when you think of hip-hop meccas, but it’s home to Madlib, Babu, Oh No, Anderson .Paak, Declaime and Wildchild just to name A FEW. With an estimated population of around 200,000 there’s a ridiculous density of hip-hop talent per capita in the area. Something in the water perhaps? But when I went around looking for things to unearth like an Animal Crossing scavenger, I dug up a fossil named “Bad Neighbor.” Archeologically speaking it’s not even that old, having only come out five years ago, but in the time compressed span of hip-hop that can feel like a full century ago.

This release combines the production skills of the aforementioned Madlib with the rap skills of fellow Oxnard resident MED a/k/a Medaphoar and Inglewood artist Blu. Suffice to say this is a hella Cali album, but with Madlib behind the boards, it transitions beyond geographical distinctions. He makes magic for people all over the world — from Gary, Indiana or London, England — it doesn’t matter where you come from. As long as you’re dope on the mic, Madlib has a beat that can make you shine like compressed carbon. “This remind me of Merlot/this remind me of fur coats/this remind me of purple, Crown Royal/It sound royal when you let Madlib design sounds for you.” Well said.

If I couldn’t have loved the track any more, a guest appearance by Phonte sealed the deal. Over the course of 50 minutes “Bad Neighbor” represents a simple truth over and over again — when you let great people work with each other they can create great things together. The rolling freestyle jazz rap of “Burgundy Whip,” the pimped out return of AMG on “The Stroll,” the smooth deliciousness of “The Buzz” with crooning by Meyer Hawthorne, and even some pure throwback funk instrumentals like “Knock Knock.” It’s all here. Anything you could ask for this trio can provide that like a sleazy label owner taking Alchemist to IHOP.

It’s hard to know where to begin OR end when talking about the unexpected pleasure of this discovery. I could talk about Anderson .Paak making a cameo on “The Strip,” or I could wax poetic about “Belly Full” with Black Spade, or I might spend an entire hour telling you how much I want an instrumental for “Drive In” with Aloe Blacc. I think it’s easier to say you could pop this album in, hit the random skip, and wind up with something enjoyable each and every time.

I haven’t been grateful for the circumstances that led to 2020 being a canceled year very often, but “Bad Neighbor” has unexpectedly made me feel lucky to have had the opportunity to dig, dig, dig until I came up with solid gold hip-hop. There’s absolutely no reason for you, me, or anybody else to sleep on this one any longer.