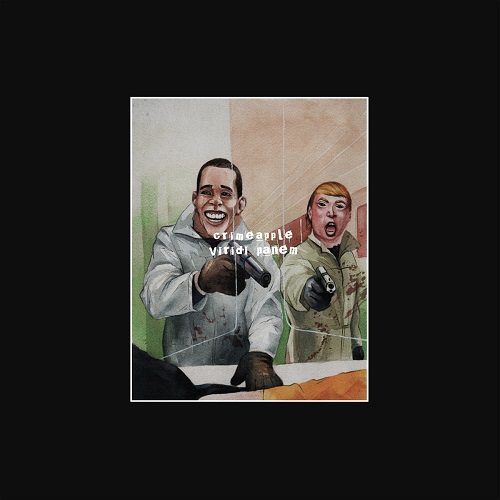 In the 1976 film ‘Network’, television CEO Arthur Jensen confronts the mad newsreader Howard Beale in a dark boardroom. The monologue Jensen yells towards Beale concerns money – the “holistic system of systems” comprised of “one vast and immane, interwoven, interacting, multivariate, multinational dominion of dollars”. It’s a frightening speech – in the corporate context, money is the most important asset, and to threaten the accumulation of it in any way, as Beale does, is to invite trouble. Jensen’s speech, sampled over a ghostly piano, is a fitting introduction to New Jersey MC Crimeapple’s “Viridi Panem”, a concept album about greed and taking part in the violent rat race to enormous wealth.

After the manic speech of “Initium”, producer Buck Dudley channels Vangelis with soaring, ‘Bladerunner’-style synths on “Lupos”. Dudley, a frequent Crimeapple collaborator, produced the whole album and provides a consistent moody atmosphere across all the tracks. Once the synths start warping, a dampened drum loop begins, and we hear Crimeapple’s signature intro “Wa” followed by two minutes of dense, memorable rhymes. It’s hard to go past lyrics like: “I heard biting was the best form of flattery / and now I’m glad to see / some teeth marks in my strategy”. In regard to lyrics, I associate Crimeapple with the dense style of battle-rappers and punchline MCs – the kind who rhyme witty lines you haven’t heard before and have you involuntarily saying things like “Wooo!” and “What?” out loud.

“Entenmann’s” keeps the low-key synth sound, but is notable for a high-pitched whirring in the background reminiscent of a horror film effect or an angle grinder shaving a piece of metal. Buck Dudley does all he needs to do on “Viridi Panem” by giving Crimeapple distinct, head nodding beats without screwing with the formula for the sake of it. And, perhaps the best way to describe Crimeapple and Buck Dudley’s sound is through Crimeapple’s assertion of what he isn’t: “Don’t knock me for trying to bury / seven weirdos singing like Ne-yo / shit is scary”. If that’s not enough, there’s a shoutout to Peter Rosenberg’s late-night show on Hot 97 – an indication of what company “Viridi Panem” might keep on the radio.

It sounds like someone’s leaning on a church organ at the beginning of “D’Angelo Vickers”, before the chords disappear among scattershot drums and a distorted synth bass note. In a reference to ‘The Office’, Crimeapple “needs the cake like D’Angelo Vickers”, while chastising other rappers for asking for “free verses” like he’s “beneath worship”. Halfway through the track, shakers and a sample of a man talking about loving money (“I love money more than I love the things it can buy”), introduces a new beat. A slow drum loop with a particularly dirty sounding hi-hat sits alongside an eerie theremin-like whine, while Crimeapple makes threats (“For your necklace / they blow your neck right through the headrest”), and switches between Spanish and English, reflecting his Columbian background.

On “Alium”, Crimeapple laments about an unfaithful partner over echoey drums and a sample of woman moaning that would be at home on any Dr Octagon record. “Alium” is low-key and a step away from the soaring synths and murkiness of most of the album. In the first verse Crimeapple is loveless: “Like Brandy / sitting in my room / pissy drunk / listening to Delfonics / till I vomit”. But, after listing grievances, he quickly moves on, and by the second verse he’s flirting like it’s Raekwon’s “Ice Cream”. The down-tempo lull of “Atrium” doesn’t last long. “Phil Spectre” kicks in and has Crimeapple rhyming rapidly over organ and a soul group singing the word “money”. A steady bass provides the rhythm on “Phil Spectre”, and while focusing on Crimeapple’s quick flow, I barely noticed there weren’t any drums. This restrained duo of tracks (low-key, drumless) only help the standout track “Dead Gringos” hit harder.

“Dead Gringos” is the second last track on the album. Over another church organ, Crimeapple starts “Dead Gringos” by making some casual demands: “Imma need all the bread and yours too…get on the ground please”. Tension builds, before warping synths are laced with a steady snare and quickly delivered rhymes such as: “Plenty horse muscles in the chariot / Novarian hatchets / not very compassionate / since the Saint Lazarus / got some stained glass in it”. Watching the unnerving video clip for the track (and the robbery within it), it’s tempting to imagine “Dead Gringos” as a pivotal scene in the album – a heist in which Crimeapple is stealing money to buy his dad a “a place with a lake where he can fish” and his mum, “a new spot next to Queen Latifah’s crib”. What distinguishes “Dead Gringos” from other robbery-rap tracks, is that most details of the robbery are missing. Money is the focus, and “Dead Gringos” consists of reflections on the decadence and comfort that money can buy. All by “stacking up dead white dudes”, a line from the chorus that’s a new flip on Rakim’s classic mission to “make some dead presidents”.

How to end this concept album about greed? After the heist of “Dead Gringos” it’s time to disappear and live comfortably, thus “Viridi Panem” finishes with “Time to Go”. To reiterate it’s the end, the beginning of the track features a soul group singing “Time to go” over a swing rhythm before expertly layered sung notes are placed over a lively funk bassline. “Time to Go” demonstrates Buck Dudley’s versatility – the bleak synths have disappeared and have been replaced by a complex beat reminiscent of Madlib production. Crimeapple goes out rhyming, the first lines giving an indication that lyricism is always present: “Who the prettiest / grittiest brilliant idiot? / Shit’ll get really sick”. And, the lyrics on the remainder of the track elicit the same ‘What did I just hear?’ reaction that Crimeapple provides for the entirety of “Viridi Panem”.

“Viridi Panem” is a concept record about making money that never lets the concept take over too much. I often don’t like concept records that follow a story too closely. For example, my favourite moment in Mr. Lif’s concept record “I Phantom” is when Lif rhymes about lyrically bombing governments and frauds – a scene that fits in with the album’s narrative while being a boast track. This sort of metaphoric doubling is what hip-hop does best. We know when Wu-Tang talk about swords they’re considering the sharpness of a tongue and of lyrics, while maintaining the physical threat and image of a real sword. Crimeapple’s “Viridi Panem” is about the paper chase, the unrelenting pursuit of large amounts of money – the concept is effective because we can read it in two ways: Crimeapple making money through (as his name might suggest) crime and robberies or, as “Viridi Panem” demonstrates so well, through excellent music.