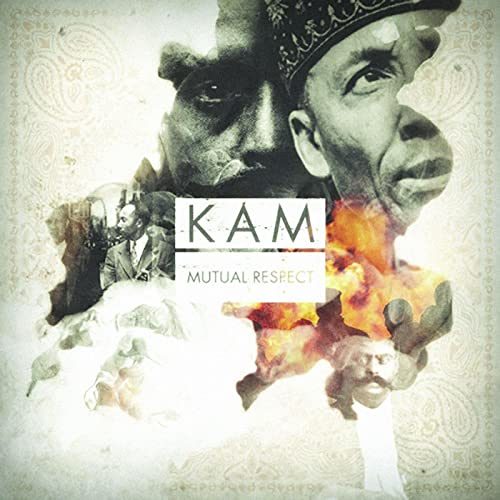 “Mutual — whether it’s in the street or institutional
Whoever bringin the heat, here’s somethin you should know
that we all gotta eat — so treat people
how you want to be treated, what’s the solution?”

Respect is an ideal word to start with when discussing Craig Miller. The emcee better known as Kam first caught my attention on the Boyz N the Hood soundtrack thanks to the DJ Pooh produced “Every Single Weekend.” His deep voice and frank narrative about the “weekend warriors but weekday cowards” made a powerful impression on me. I had no idea he was Ice Cube’s cousin at the time, but in hindsight being on the soundtrack to a movie starring O’Shea Jackson and working with one of his favorite producers makes it pretty obvious. Either way I was definitely checking for Kam when he dropped his first album “Neva Again.” I still regard it as a hip-hop classic of the highest caliber to this day.

Although Kam followed up with the very strong “Made In America” two years later, the politically minded rapper undoubtedly found it hard to gain an audience in the mid-to-late 90’s. The rap scene became obsessed with taking sides in an unnecessary East coast/West coast beef centered around Biggie Smalls and Tupac Shakur. Not only did this shit on hip-hop scenes in places like Houston, Detroit and Chicago, it shit on intellectual or conscious rappers who didn’t fit neatly into the media-fueled feud. When people look back fondly on indie rap from the 90’s, it gained traction because it was where artists who didn’t have any other choice had to go. Small labels, DIY and the constant hustle made them beloved underground rap stars.

Where did that leave an artist like Kam? “Nowhere.” Having been put on by his cousin, landing a major label from the start, and suddenly left adrift in a scene dominated by Death Row and Bad Boy, Kam didn’t have the “strong feeling of support or allegiance” from the industry his compadre Xzibit talks about on 2016’s “Mutual Respect.” It was half a decade until Kam released his third album and FIFTEEN YEARS until he released his fourth. You might think that would crush the spirit of a intellectual, pro-black, proud rapper making music that it seemed nobody wanted to hear. Far from it.

“Mutual Respect” lives up to the title in multiple ways, not the least of which is Kam calling upon a slew of California all-stars to collaborate with him. If you didn’t know how deeply beloved Kam was in the West, hearing The Game on “We Got the Crown” and Kurupt on “Waiting For You” should paint the picture in vivid color. Both rappers had much higher profile careers than Mr. Miller, but their respect for Kam as an O.G. of Cali rap is clear. There’s also a celebration of unity between people of color throughout Kam’s release that’s impossible to miss. The heavy thumping “Front & Back” features Pakistani-American rapper Mr. Capone-E, the title track features Hispanic emcee Sick Jacken, and King Lil G joins Kam for “YouTube Gangsta.” The song is meant to shame people who flaunt fraudulence for fame “on Instagram and Snapchat, getting laughed at.” A lot of poseurs acting hard on social media should hang their heads after hearing it.

I get the feeling reviewing “Mutual Respect” that like so much of Kam’s career after 1995, this was a blip on the radar drowned out by the noise of the scene around it. Kam fits no better into an era of AutoTune emcees with brightly colored teeth and hair than he did being a thoughtful rapper surrounded by G-Funk and coastal turf claiming. “From Yo Hood to My Hood” featuring Chino Gee and Decceck 4 Real shows that over the last 30 years, Kam is no longer just “that Nation of Islam rapper” — he’s someone seeking to cross cultural and racial divides to find unity. He can “Never Look Back” and live in the past — Kam only moves forward to the future.

To be perfectly clear though “Mutual Respect” is as much a compilation album as a Kam album. That doesn’t make it a BAD album. Kam’s distinctive voice has not been dulled by the decades, so when he speaks on any of these songs it still carries authority, no matter how many guest stars he’s sharing the spotlight with. If you’re looking for that 1990’s Kam who clearly didn’t need any help from anyone other than DJ Pooh or his cousin, forget that. Mr. Miller is showing respect to other artists more than himself here, and although they show it back to him on these tracks, it’s unintentionally a reminder that you’d love to hear Kam hold it down all by his lonesome. There isn’t a song on here that lets him do that, but given how overlooked he continues to be by the industry, I’ll take any Kam over no Kam at all.