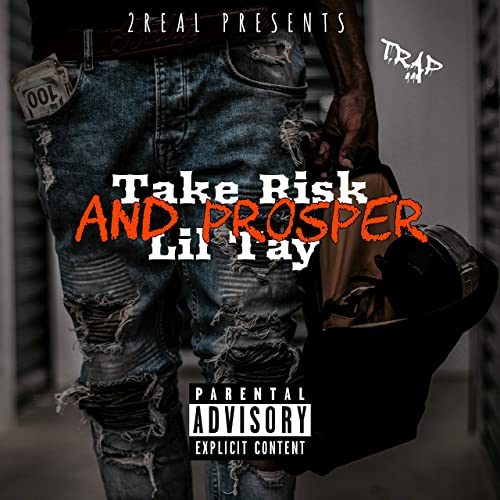 Given the risk for confusion is incredibly high here I’m going to have to open the review by telling you this is NOT the Lil Tay you were thinking of. That Lil Tay became a living meme by becoming the embodiment of every flossing rapper in a child’s body, then became a news scandal after there were numerous accusations she was being exploited and abused by her family. I’m not going to dig into that mess here. I’m only telling you this because if you search for the Lil Tay behind the album “Take Risk and Prosper” every result comes back for the YouTube star. You only have to listen to a song like “Get It Crackin” for a few seconds to realize this is not a young child rapping — this is a grown-ass man rapping.

Eventually if you modify your search terms enough you can find the “2real” Lil Tay on Instagram, which should (for this review anyway) put an end to the confusion. I’m still left wondering which of them has trademarked the name and who might have to change their handle at the end of the day, but I digress. This Tay is fond of flipping middle fingers in his ‘gram feed and with songs like “Fuck No” on the album it’s not a surprise. “Pull up on me, don’t creep ho/Cause I’m a shoot it like a free throw/He he thinkin he scorin, fuck no/Top shotter, call me honcho.”

The heavy ebony keys and big bass reverberations make the track somewhat appealing even if the topic matter isn’t that special. In truth the production holds up Lil Tay for most of this album. “Name Droppin” has so much bass that it starts to distort when the hits overlap, but as a listener I’m still in favor of it. “Go Get Bag” feels like it comes from a horror movie and leans hard on AutoTuning, but it’s listenable when you’re not paying close attention to the bars. With a little bit of editing “My Own Lane” is the kind of song you’d hear on your local “Where Hip-Hop Lives” FM radio station.

“Take Risk and Prosper” also benefits from only being 33 minutes long, so it’s hard for Lil Tay to overstay his welcome on the album. One thing I couldn’t help but notice though while tracking down this rapper is that some tracks on YouTube (uploaded automatically by TuneCore) had no thumbs up and multiple thumbs down. I’ve heard so many artists so much worse than “2real” Lil Tay that I can only assume that fans of the OTHER Lil Tay are just mad at the confusion these similarly named people generated. If I’m going to pay attention to only one Lil Tay though, this’ll be the one.