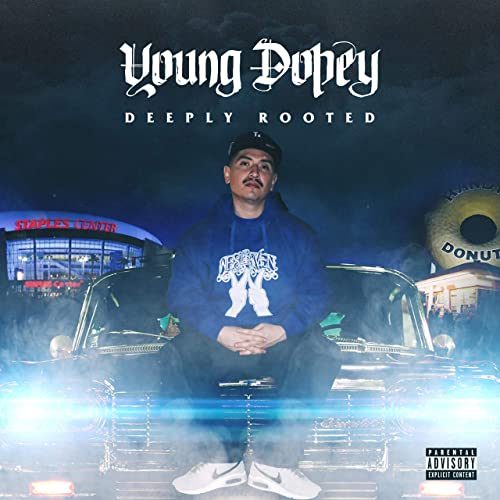 “I’ma shoot it out with the enemies/got a bulletproof vest, ain’t no bitch in me”

I’m less than a minute into Young Dopey’s “Deeply Rooted” and I’m already confused. A bulletproof vest is something you wear when you’re afraid of being shot. That’s the whole point. You put it on to (hopefully) stop hot lead from penetrating your vital organs. Now you might feel fearless after putting one on, but unless you’ve got similar equipment for your arms, legs and most vitally your HEAD that’s not going to stop bullet from destroying your limbs, ripping through vital arteries, or turning your skull into Swiss cheese. Wearing that much heavy protective gear would also slow you down tremendously (ask any combat veteran) so there’s a strategic “risk/reward” balance to how much you cover up versus the likelihood of a bullet finding its way inside you. Those are calculations no civilian should ever have to or want to make. Forget whether or not there’s “no bitch” in Young Dopey and ask yourself — how much protection does he really need?

Therein lies the unintentional irony of songs like “Instafake.” It’s now a standard hip-hop trope to mock poseurs, and as far back as the 1980’s rappers referred to those who talked big on records but didn’t back it up in the streets as “studio gangsters.” The problem is deciding who or what gets to be the arbiter of truth. Do scars from bullet holes qualify? Does a lengthy criminal record prove you’re real? Being on the news for starting a fight at the club? Being mentioned by O.G.’s as a real one in interviews? Perhaps. There’s an old saying though: “Real gangsters move in silence.” If you brag about what you’re doing on record, it can come back to haunt you in a big way. Being “fake” might not get you cred but being real can get you life.

“Oh you think you hard? Oh you think you tough?
To me, made me laugh, really funny as fuck
Pulled up wit’cho girl and you looked around
Made sure it was safe, then you came out
Ran over there, just to take a flick
Then you ran back to the car like a little bitch
Drove away, then you went and put it up
And that shit really made you feel active huh?”

Singling out Young Dopey for the contradictions isn’t entirely fair. The problem of rappers who lambast other rappers for being fake on social media or in their music while simultaneously expecting listeners to take them at face value is as old as the genre itself. To some degree you need the same suspension of disbelief required to watch Hollywood movies, “reality” television shows, or pro wrestling. You need to flip the switch for critical thinking from “on” to “off” and allow yourself to be taken along for the ride. You ignore the contradictions and focus on how good the music is, how well the story is being told, the quality of the vocal delivery and whether or not an emcee’s metaphors, punchlines, and bars create a powerful impact that’s memorable beyond the first or second listen.

“Young Dopey. It’s 2020. I got locked up a few years ago around this time. Let’s see how many motherfuckers die, how many motherfuckers multiply, how many motherfuckers get locked up. Let’s go! You don’t wanna see me back to the old me/in your neighborhood wiping out your ho-mies.” At the beginning of “The Old Me” I was sucked in by the instrumental’s funk, but before the intro was over my suspension of disbelief was already shattered. Once again Dopey has to make it clear that everybody in the whole wide world isn’t as true to the game as him. He’s the only real one alive today.

For what it’s worth I’ll accept at face value everything Dopey says — he’s really been to jail, he’s really shot people, he’s really not to be fucked with. That’s fine. Now why does he obsess over constantly reminding us of it at every turn? If he’s that legit, there’s no need to stress it repeatedly. It makes him come off like the “Instafake” rappers he’s complaining about. Why even mention you got locked up a few years ago? We don’t know your real name, we don’t even know where you live. Are we supposed to look this up and validate it? Of course not. It could be true or a crock of shit and it doesn’t even matter. All he needs to do is make good music.

“Deeply Rooted” is limited by the fact that all of the elements don’t mix together in a way that allows you to feel his flow. It comes across as an imitation of what other gangster rappers have said, turned up to 11 and regurgitated ad nauseum. I don’t need to be convinced Young Dopey is a true G. The very fact he chose a rap name that one could easily mock means he’s probably likely to brandish a pistol and start the old Tommy DeVito “I’m funny to you, like a clown” speech if you do. All I’m saying here is that there’s no way for the average listener to tell the difference, and the result is that the more you talk about it the more it comes across as insecure. If you’re that bad and you know you’re bad you don’t have to talk about it or prove it to anyone. There was potential here but Dopey fritters it away by spending too much time selling his persona instead of telling you a story.