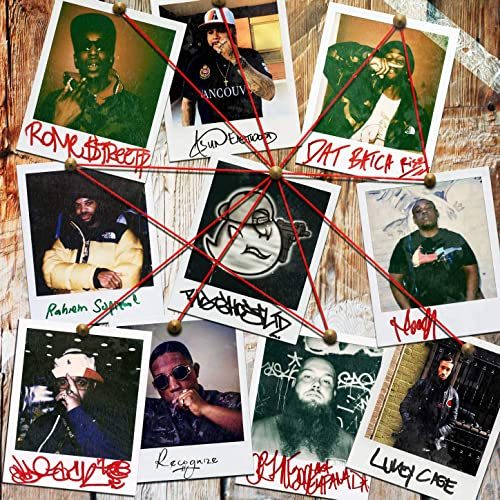 The story of “Big Ghost” is pretty strange. He began as a blogger and quasi-parody of Ghostface Killah whose anonymity still remains in tact almost a decade later. His screeds earned both the ire and respect of his namesake in short order, and despite (or perhaps because of) threats from Wu-Tang Clan to shut the “impostor” down he resisted and persisted online. Eventually his cult following became its own mini-empire, culminating in actually producing a Ghostface album with the blessing of Mr. Coles himself. He’s also worked with 38 Spesh, Westside Gunn and Conway the Machine. To me that suggests our protagonist is himself from upstate New York, but I can’t offer any proof of it, and Big Ghost isn’t about to confirm his true identity let alone the location of his secret hideout. He will bring some people on to talk shit on his behalf on “Carpe Noctem” though.

The cover of “Carpe Noctem” looks like one of those conspiracy theory walls that Vic Sage would pin up linking the fluoride in toothpaste to government mind control, all with the logo for Big Ghost conspicuous in the center. Despite the clever reference to him being the mystery at the heart of a burgeoning empire, a more simple and direct interpretation would be that this album is a compilation, and these are all of the featured artists on it. That’s certainly the impression one gets from “Murder at the Opera.”

The genius of Big Ghost is that he yearns for a return to pre-emo rap and his collective ably reflects that attitude. There’s no studio trickery to turn rappers into crooners, no plaintive crying over lost love, and plenty of macho posturing like “I can’t relax on these niggaz” and “almost killed a nigga for trying to smoke in the back” on tracks like “The Elegy.” There’s an obvious irony that Ghostface Killah became one of Wu-Tang’s most beloved emcees BECAUSE of heartfelt over-the-top emotional songs like “All That I Got Is You,” but we’ll let Big Ghost be his own man and his Clan be his own clan. When these dudes want to reach the peak anonymity of their leader and achieve his fame themselves, “Fake My Death” will be the blueprint.

As fascinating as the man behind “Carpe Noctem” and the movement as a whole is, the results on this compilation can be wildly uneven at best. “Hate to Love” featuring Mooch & Rigz sounds ironically close to being a Ghostface Killah rap at the beginning, but the instrumental under it doesn’t justify the performance. “Clyde Frazier Minks” goes for epic but only winds up being epically long. When everything lines up though songs like “Paper Plane Lords” are fascinating exercises in minimalist production and excessive testosterone. “Hyperbolic time chamber mack daddies son” is only a small taste of the absurd yet charming lyrical bravado found within.

There’s a method to the madness that makes you want to get off the cloud you’re on so you can know these rappers and their style — they do be getting flam when it comes to a jam. The inspirations of the founder of this movement and his affiliates is clear, and they do say imitation is the sincerest form of flattery, so it’s not hard to see why Ghostface Killah has had a love/hate relationship with Big Ghost over the years. He remains the mystery at the center of the maelstrom that is “Carpe Noctem,” which if you hadn’t already translated is Latin for “Seize the Night.” They certainly do on this release, though I’d enjoy a more narrow focus featuring one or two of their best representatives, perhaps paired with some 38 Spesh production.