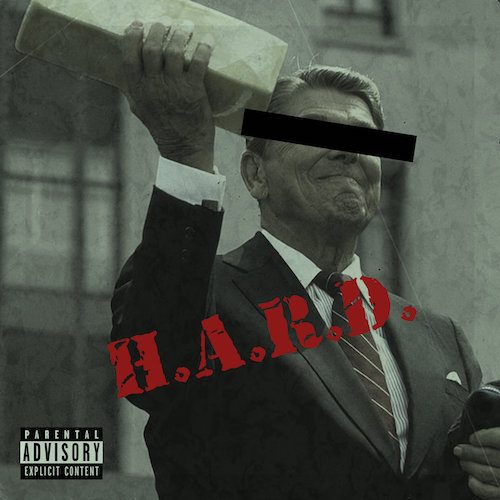 Slaughterhouse may be defunct, but three out of four of its members remain in the game. Though the business of rapping involves sacrifice and frequent bouts of discouragement, those who keep at it and adapt to it deserve praise. And for some of these rappers, though their output can range anywhere from a resounding “meh” to being completely “wowed!”, they’re consistent at the very least. One of the most consistent emcees over the last 10 years has been Joell Ortiz. He treats his lyrics the way Tony Stark treats his Iron Man armors: He makes improvements on each design without having to take any kind of steps back.

Despite popular opinion, rhymes and lyrics remain important in hip-hop and the Brooklyn emcee is part of the minority which still puts that idea to practice as does West coast rapper KXNG Crooked. Though steadily dope, it’s clear that a major part of that is him stepping his pen game up on subsequent releases. That brings us to “H.A.R.D.“, an 8-track collaborative effort between the two former Slaughterhouse emcees. The album shows some slivers of what to expect from both men in the future despite its short length.

The production is varied and it’s the Dipset-affiliated Harlem duo of the Heatmakerz who helm three of the eight tracks. The album opener is the title track and features Detroit quadruple threat MRK SX (pronounced “Mark Sox”). The vocals on the hook have a pop-friendly feel to them. I came to find that many of the tracks share that aspect. Including the next one, “Get Ya Money”, produced by both Erick Sermon & Boogeyman. There’s a woman singing throughout, and the beat has more of a boom-bap sound compared to the last track, with piano key samples interspersed. Crooked I takes center stage on “Caddy Bump (LBC)”. Produced by !llmind, the New Jersey beatsmith employs lush echoing samples which even extend to the multi-tracked handclap snares. The first single of the album, “Memorial Day”, has the characteristics of a gospel funeral. Produced by the Heatmakerz, the elegiac lyrics are highlighted by the Heatmakerz’s use a chopped and looped choir sample to give the song a homecoming feel:

The Heatmakerz return on “Lose My Mind” and bring Blakk Soul with them. Though I don’t imagine it to be their intent, this song has pop potential with its melodic guitar chords and female vocals. “Wolves (BKLYN)” is perhaps the darkest track on the album with its J.U.S.T.I.C.E. League production consisting of hard drums and ominous piano keys. In polar opposite to that, the !llmind-produced “Lovely” is more friendly. The beat sounds pretty bouncy and lyrically, it’s just about having a good day. Mello Music Group’s most prolific producer, Apollo Brown, makes his presence known on “Catchin’ Bodies”. Over a string instrument loop, both emcees go sick. Joell drops the heavy load from jump street, with Crooked not far behind. The wordplay of both emcees his rewind-worthy, as there are numerous quotable lines:

The album cover is an image of former U.S. President Ronald Reagan holding a block of government cheese, in reference to the excess of it that the U.S. still has. One interpretation of the album cover is that it stands in contrasting juxtaposition to the album’s length, which is considerably less. Though the length of “H.A.R.D.” leaves this listener wanting more, I can’t fault Joell or KXNG Crooked for wanting to put their heads together for a record, a lyrically bold one at that.