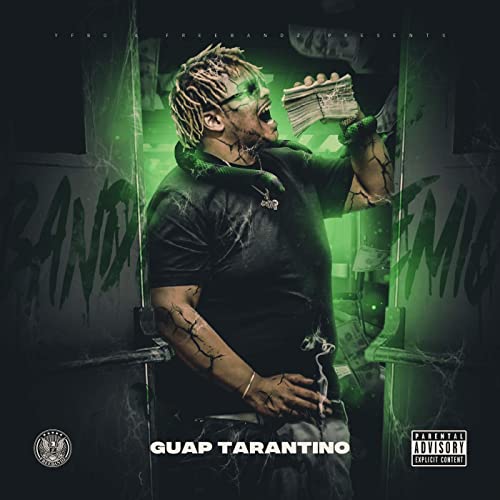 It’s not a particularly promising start for “Bandemic” when I can’t find any Wikipedia entry for Guap Tarantino. It left me pondering which part of the equation I wanted to focus on — the absurd title which seems to be mocking the global pandemic as though it’s just another money hustle, or the absurd name which seems to be mocking the popular/controversial movie director Quentin Tarantino. Eventually I chose the latter and came across a page for what purports to be his booking agent, from which I learned he hails from the East side of Atlanta and did indeed name himself after the Hollywood kingpin. I still don’t know his real name, his age, or anything other than that he’s the latest rapper to affiliate with Future’s Freebandz label. Actually we do know one other thing — the first single is called “Trap Krazy.”

It’s only two minutes long and somehow manages to be repetitive in that time. “Pay me, pay me, pay me, need my cash, I need my pay.” We get it. “Broke ass nigga can not phase me, broke ass nigga can not phase me.” Dude, I said WE GET IT. At least if he’s going to flip a worldwide health crisis into a “Bandemic” he’s being consistent in his singular obsession with cash. Even at “3 AM” in the morning Tarantino’s hustle is the only thing on his mind. “A quarter million […] got it before the album, I ain’t even went platinum.”

He wastes no time bragging that he’ll “go to Rodeo (Drive)” for “shopping and fin’ to show them how we ball.” No Haterade here. If he’s really got it like that and can shop it like that, I just hope he and his crew are masked up and staying a respectful six feet away from the people checking out his purchases while he spends bands on bands on bands. No reason to get other people sick during the “Bandemic” just because you want to floss. The funny thing is that he’s from the A-T-L, which he mentions enough on the album I’d pick up on it even without his booking agent bio, yet Rodeo Drive is in Beverly Hills/Los Angeles. Shouldn’t he be spending that money at Lenox Square or The Hub? Think global, spend local. “So many bitches it look like a hoe house” quips Guap on the obviously titled “Hoe House.” Aight then. Spend a few bands on them too.

The best thing about the song is the cameo by Lil Yachty, and that’s endemic to much of “Bandemic.” Tarantino can’t keep things interesting on his own, so even guest stars I’ve never heard of like BabyFace Ray on “Plug Talk” and YTizzle on “Geeked Outer Space” wind up being a breath of fresh air. The latter also has some of the best bass reverberation of any song on the album, although owing to a lack of liner notes and a lack of producer drops in the song, I can’t give any credit for it. The need to punctuate every bar with bird trills, whoops and echoes of the last syllable ultimately makes the presentation annoying, but in an album bereft of highlights you take whatever you can get.

I’m convinced I’m missing something here about why Guap Tarantino is supposed to be the new hotness. I get that he’s with Freebandz, but he’s no Doe Boy or Young Scooter. I get a quasi-Migos “Bad and Boujee” style feel to his tracks and his delivery, but it feels like a carbon copy of a proven formula instead of a reinvention of it to elevate it to something fresher. If you hear someone who sounds like quasi-Migos, you just wind up wanting to hear Migos, and that’s exactly how I felt when I was done with this album. Guap Tarantino isn’t awful, but the most interesting thing about him turned out to be trying to learn who he was and not the music he made.