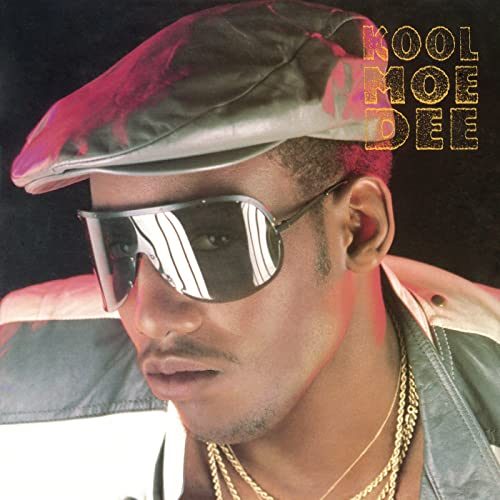 Mohandas Dewese b/k/a Kool Moe Dee is a towering figure in hip-hop music. From his time in pioneering group Treacherous Three, to his long-running feud with LL Cool J, to winning a Grammy Award with Quincy Jones, his name was synonymous with hip-hop from the late 1970’s to the mid 1990’s. His oversized Porsche Carrera sunglasses were as identifiable as Run-D.M.C.’s Adidas sneakers and fedora hats. It’s strange to me just how quickly such a larger than life figure from my youth has gone from household name to never even mentioned in passing by a single soul. At a time when my local radio stations outright refused to play most rap records, Kool Moe Dee’s “Go See the Doctor” got airplay without a single request.

Even with that kind of crossover airplay I still had a hell of a time finding Kool Moe Dee’s self-titled “Kool Moe Dee” album for sale anywhere. In the same way that local stations refused to play most rap songs, local retailers refused to sell rap albums, either believing they wouldn’t be popular enough to justify the shelf space or that parents wouldn’t want their children listening to it. Ironically Moe Dee is just about the cleanest cut rapper you could think of. Just think about it for a moment — he made a funny rap song about getting V.D. and managed to get it on FM radio. The album claims to have an “uncensored version” but aside from no extended instrumental break it seems to be lyrically and musically the same.

The double entendre of “Dumb Dick (Richard)” actually comes closer to being explicit than anything in Kool Moe Dee’s ode to using condoms. “Girls was all he was thinking about/If the school was all boys he’da been dropped out/When he did drop out, he felt no shame/And if you asked me, he had the right name/Cause he hated to go, but he loved to *come*/That’s why I call him Dick, cause Dick is DUMB.” He even implies that Richard literally has “dick for brains” at the end of a verse. Surprisingly this song was also released as a single. Less surprising is the fact that I never heard it on the radio.

As affectionate as I am for this childhood hip-hop idol, I have to be honest and tell you that “Kool Moe Dee” is an incredibly dated sounding album. It’s not that it sounds BAD. How could it? Teddy Riley among others can be found in the liner notes as Moe Dee’s producers. It’s undeniable when you listen to a song like “Bad Mutha” though that there’s a very 1980’s style of hip-hop to both the beats and rhymes. The focus is almost entirely on the drum pattern, there’s a super obvious doubling and reverb added to Moe Dee’s vocals, and he’s almost obsessed with never being off beat. “Over-rated/Rappers, made it/on a wing and a prayer/with old beats updated.” It’s not unpleasant because Moe Dee has a deep, powerful baritone and very clear delivery, but it does feel very patterned while listening.

When Kool Moe Dee declares himself “The Best” I want to believe him, but in 1986 there were already scores of emcees who were far more versatile in style, delivery and clever rhyme writing. The stilted bars become incredibly predictable over time — you know he’ll rhyme “level” with “treble” and “weak” with “critique.” For comparison’s sake just think about the fact that Eric B. & Rakim’s “Eric B. Is President” also came out in 1986, so no matter how much Moe Dee thinks he’s “The Best” he wasn’t even on Rakim Allah’s level, let alone his constant rap nemesis James Todd Smith.

I have a natural affection for the self-titled “Kool Moe Dee” album because it’s a snapshot of a time in my life where I was actively seeking out rap albums and not finding many for sale. Often the only way I could get my fix was to buy used records at Half Priced Books, and I mean literal 12″ size records, which I would then have to borrow a turntable to dub off to a tape so I could listen to them later. Shortly after this though the floodgates broke open and you could suddenly find N.W.A and Digital Underground tapes at stores like Target and Walmart. They’d often be censored versions, but it was far better than nothing at all. That sums up this Kool Moe Dee release quite well actually — not what I wanted, but better than nothing at all.