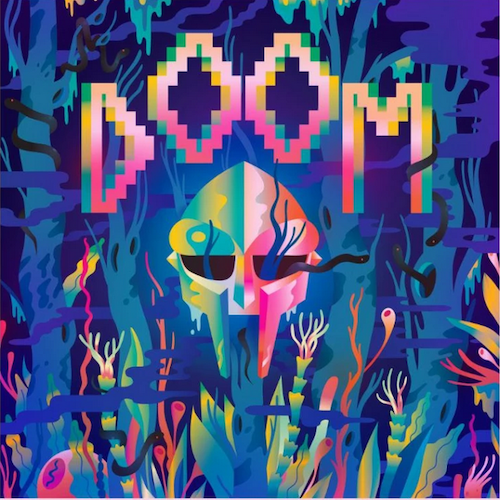 “The Missing Notebook Rhymes” is one of the most accurate album titles of all time, but explaining why requires a few background details. The relationship between Daniel Dumile and [adult swim] started in the mid-2000’s not long after the late night programming block debuted on Cartoon Network. It was the kind of crossover that seemed natural from its inception given that the MF DOOM persona was inspired by and based on the villainous Doctor Doom of Fantastic Four fame. He could be heard voicing Gerald (a giraffe) on anime parody series Perfect Hair Forever and collaborated with Danger Mouse for “The Mouse and the Mask,” an album which sampled from and referenced all manner of cartoons on the channel. The partnership even extended into Dumile doing cutaway skits for special events like a Christmas day programming marathon.

When “The Missing Notebook Rhymes” was announced in 2017 it seemed like a natural return to the successful collaborations between both parties from the 2000’s. Once a week over the course of 15 weeks, DOOM and [adult swim] would release a new song through the latter’s website, with the end result being a complete MF DOOM album given to his fans for free. Unfortunately that’s not the way it actually worked out. Only seven weeks into the project the relationship between Dumile and Cartoon Network was abruptly cancelled, leaving the remainder of the songs ACTUALLY missing. No satisfactory explanation for this cliffhanger has ever surfaced, nor have the remaining eight tracks, which may in fact not even exist. If DOOM was producing the project on a week to week basis, he may simply have quit making tracks when they terminated the deal… or they may have terminated the deal BECAUSE he quit making tracks. Who can say for sure?

Not only is the name of the album now historically ironic, the recent passing of Daniel Dumile makes the lead single “Negus” doubly ironic. One of the featured performers on the track is the late Sean Price, with Ike Eyez and Dumile fleshing out his posthumous bars into a full length song. The song now haunts our collective memories as does the next week’s track “True Lightyears.” Guest star Jay Electronica is certainly not deceased, but by crediting a feature to K.M.D. it certainly invoked memories of Dumile’s dearly departed brother Subroc. Many have speculated over the years that this track’s inclusion was to signal the reformation of the group, but much like what happened to “The Missing Notebook Rhymes” there’s no conclusive proof of DOOM’s intentions either way.

Tracks like The Alchemist produced “DOOMSAYER” certainly hint at magnificent possibilities though. Imagine an entire MF DOOM album a la “Madvillainy” with Dumile and Alchemist working together on the beats. The potential dopeness is amazing to think about. If one were to read between the lines of this “Notebook” though it may be that the project was already running on fumes a few songs in. Dumile stopped naming the songs, simply releasing them as “Notebook 03” or “Notebook 04” featuring Kool Keith. Now that’s a team of Super Villains I would have wanted to hear a whole album from.

The last two tracks that exist are each barely longer than a minute long, making the entirety of what we know of “The Missing Notebook Rhymes” sixteen minutes in total. There’s nothing that can be done about it now. The rest of the album is either out there somewhere, or it’s not. Due at least partially to the project being incomplete, there’s no physical version of “The Missing Notebook Rhymes” either, although it’s conceivable that Dumile’s wife could authorize such a release on behalf of his estate. In the meantime and in between time you’ll just have to find the free tracks that did come out online. They’re all over the place — much like the music itself. The only thing that holds these “Rhymes” and beats together is Dumile’s mad genius. It turns out that’s more than enough to make it work.