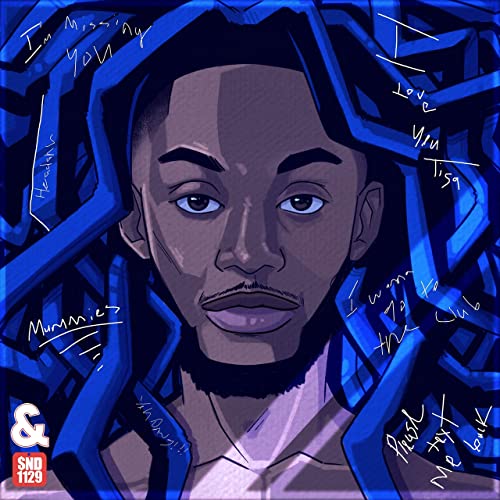 “Time to take a shot/nigga I really don’t give no fucks/two shots, fuck my kidney up”

They say music is for the young and TisaKorean is definitely living like it. The Houston area rapper’s rise began two years ago with a feature in The Fader that pointed out his refusal to “drip,” preferring instead to “soap” to show just how clean his style and swag are. He also has an incredible passion for alcoholic beverages, which experience has taught me usually leads to people getting sloppy. “Shit got me leaning/fuck, my head beaming! Fuck, I thought I was dreaming” raps Tisa on “iRock (Sippin on Dat Ciroc).” That’s about the point you’re either going to throw up all over yourself, pass out, or both. When you’re that tilted it doesn’t take long to get dirty.

My age is showing when I say I can’t drink like Tisa or his friends, but it’s also showing when I say that Tisa is RAPPING on “Wasteland.” (The period is not the end of the sentence — it’s actually part of the album’s title.) Many artists in his demographic would unapologetically be singing and tuning their way through tracks, but Tisa has more in common with Tyler, the Creator than his own peers age-wise or geographically. He’s bragging a bit more than Tyler would and not trying as hard to be a weirdo but he’s also not trying to do traditional rap styles. He doesn’t even look conventional with his brightly colored and beautifully knotted dreadlocks in the “Babysteps” video, and I can’t say his flow is “on beat” or “off beat.” It’s just whatever it is and pays no attention to any ordinary conventions.

“She asked for the wi-fi password/I’m like ‘Girl is you, ab-surd?'” That’s a fair response on “Did You Know,” not because he’s dissing a prospective female, but because giving out your password to anyone who isn’t immediate family is a really bad idea. In the middle of the track the song shifts up to a fast and heavy bass beat, bouncing all over the place to the point your car is going to be lifting off the ground if your woofers are up to par. I’m sure that’s exactly what he wants… at least for any female riding with him. “I love how she bounce.”

Eventually TisaKorean does bow to trends on a couple of songs, breaking out the syrupy AutoTune and slow soothing instrumental for the accurately labelled “Sunset.” Even if it’s not your bag it’s hard to deny the vibe, because he’s not just using it to brag about his swag. For two minutes and change he seems to be wooing a girl he likes. “I needed your affection/you’re changing your direction.” That’s yet another thing that sets TisaKorean apart — he’s not afraid to show his ass a little bit with an emotional track even though he vows “I can’t fall in love/this shit’s way too much.”

“Wasteland.” snuck up on me like COVID-19 does on people who refuse to wear a mask — they never saw it and then they caught it hard. TisaKorean wasn’t even on my “must watch, must listen” list before now, but my respect for his originality and creativity has jumped in the span of one album. I must be fair though and say it’s too early to declare him rap’s future. A lot of these songs are extremely short, leaving him just barely enough time to try something before it’s on to the next one. His versatility also leaves me stuck trying to figure out his point thematically. What does the album title have to do with any of his songs or vice versa? I’m sure he has a good explanation but if he has to tell you without you being able to glean it naturally from listening to it then it didn’t really work. Nevertheless TisaKorean is a H-Town rapper who seems to be on the verge of going big worldwide.