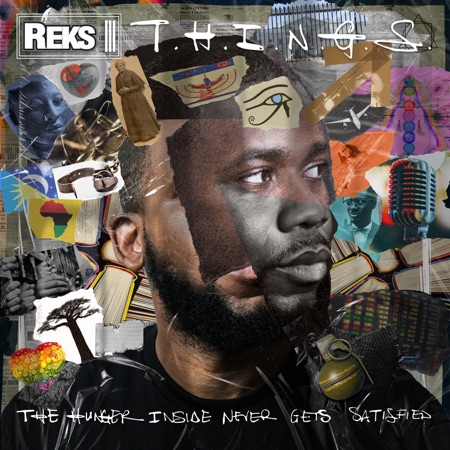 We now live in an era of rap where prominent underground emcees have huge bodies of work. Reks is a respected Massachusetts emcee that debuted twenty years ago, and “T.H.I.N.G.S.” is actually his twelfth studio LP. He’s a stalwart of the east coast scene and known for his consistent, almost dependable approach to so-called “modern boom bap”, yet he frequently shows an ability to break from that stigma.

“T.H.I.N.G.S.” continues lyricists’ obsession with acronyms, but this one doesn’t feel as forced as many do. Standing for The Hunger Inside Never Gets Satisfied, this is a record full of topics on Reks’ mind applied with his lyrical hat on. Concepts and metaphors run throughout, perhaps the most out of all of his albums. The Apollo Brown production “Animal Kingdom” exemplifies this, albeit with mixed results, lacking the depth and intelligence of records like Pharoahe Monch’s “The Jungle”.

Prevalent themes and concept songs include social commentary on what’s occurring in the United States. “Miss-Education” takes shots at the American education system as Reks reiterates his stance of unlearning the history he was taught. “Rachel Green” signifies continued white privilege, named after the Friends character. For those unaware, Friends is one of the most popular sitcoms in television history but is a white revision of a black sitcom: Living Single. Reks points out instances of benefits a white woman inherently experiences simply by being white while aware the Rachel Green character he uses isn’t necessarily at fault for her position in society.

The best tracks are the ones that show Reks’ humanity and allow his personality to flourish. “Brotherly Love” is heartfelt and “Legacy Driven” contemplative, while “The Wedding Song” thumps enough to give fans that trademark Reks head-nod factor while keeping to a relatable theme.

There is a prevalent sombre feel to “T.H.I.N.G.S.” that becomes draining on a 19-track album, with Reks’ sharing paranoia and conspiracies that prey on his mind. As an emcee blessed with noteworthy production throughout his career, he often glides over beats without leaving memorable verses. The approach here tries to address this with a forceful use of gimmickry that tests Reks’ writing but doesn’t always make for enjoyable listening.

“Rhythmatic Eternal King Supreme” is a better-executed record, while “The Greatest X” gives listeners enough of both sides to Reks’ style. Fans will still hold “Grey Hairs” in high-regard, as does this writer, but “T.H.I.N.G.S.” has to be commended for its added experimentation and being one of few Hip-Hop records to capture the mood of 2020.