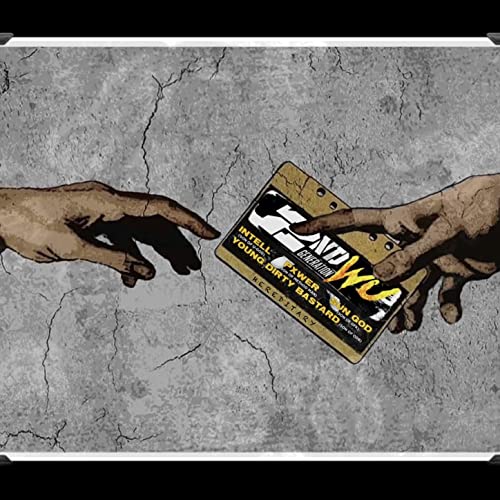 “iNTeLL (U-God’s son), PXWER which is Method Man’s son, Son God which is Ghostface son, and Young Dirty Bastard, and uh they have them framed as the 2nd Generation Wu.”

Is rap talent genetic? For that matter is any quantifiable form of talent genetic? As a pro wrestling fan I’m used to the expectation that the son or daughter of any famous wrestler will themselves be a star, but for every Charlotte Flair there’s a Ted DiBiase Jr. It’s far from a guarantee that you can capture the charisma of your forebears thanks to a genetic roll of the dice, let alone that you’ll have the physical ability and mental stamina that is required to succeed in the business. I think those same rules should apply to rap music. After all Ol’ Dirty Bastard had three kids (that we know of) and only the one named Young Dirty has made a name in the rap game. Honestly with no disrespect to the young man that’s largely because he performs his father’s verses when the Wu-Tang Clan goes on tour.

I gotta admit he represents his pops well. 2nd Generation Wu’s “Hereditary” is hoping to parlay that respect for Young Dirty to the rest of the Wu-Tang Clan’s seeds and that your nostalgia and affection for the Wu can carry the album through. Principally though iNTeLL and PXWER are the ones doing the heavy lifting as the group leaders. As for the music itself even the beats to the rhymes work for those ‘member berries. It only takes a few seconds of listening to “Guess Who?” before I’m wondering where KRS-One is to tell me about the “Jack of Spades.”

There’s an awkward degree of trying to have it both ways to this project. With a name like 2nd Generation Wu it can’t be denied that you’re supposed to like them just because of their parentage, and tracks like “From the Isles of Staten” feature catchphrases and samples from Wu-Tang classics. iNTeLL even raps “Niggaz say I sound like Meth, it be that Wu shit.” Yeah sure — I knew that Young Dirty could sound like his late pops in concert, but does the entire group want to hang their hats on imitating the people who gave life to them? I can’t say iNTeLL sounds that much like his dad anyway.

I’m hardly unbiased when it comes to the Wu. The only things I’ve ever considered tattooing on my body are an eight bit Mega Man, the classic Wu-Tang emblem, or the Public Enemy silhouette logo. I’m not much for skin art though when it comes to my own body (though I happily admire the murals other people have) so it hasn’t happened, but seeing the Wu in concert recently was a lifelong dream come true even if I was far too late to see Ol’ Dirty. “Hereditary” certainly appeals to my affection for all things Wu. My only knock I have on songs like “Wrong Route” and “PXROKENESIS” is that they’re just too short. Wu-Tang songs were often known for being epics but the 2nd Generation doesn’t break two minutes on these joints.

I’m not going to brand 2nd Generation Wu a failure for “Hereditary” largely because there’s not enough here to go on. At times I can see a spark of the flame that ignited the revolutions in the 1990’s, but it’s not given enough oxygen and the fire is quickly extinguished. The fatal foursome featured here need to decide whether they’re going to go all out trying to live off their famous ancestors, down to mimicking the energy that Wu-Tang Clan brought to their fans, or they need to establish that genetics alone isn’t the reason for their existence and they can REALLY THROW DOWN. Until then I remain cautiously optimistic they’ll find a way to make it work.