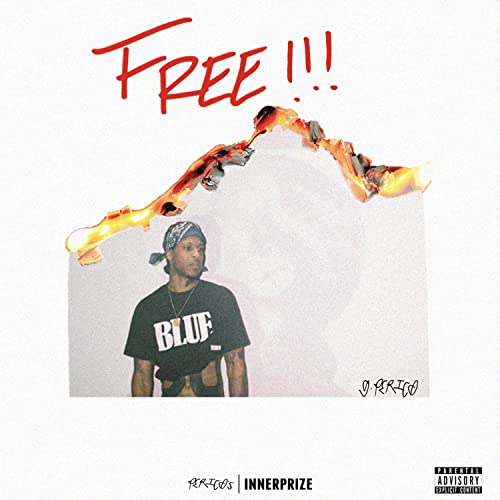 G Perico’s “FREE” EP isn’t free. The L.A. born and bred rapper wants at least $4.95 for it before tax, unless it goes on sale after this review goes live. “FREE” in this case references his success in the rap game, having released his first mixtape while he was doing a bid in 2015, and now that he’s making his name in hip-hop he’s more free than ever before. On “Never Made Statements” he breaks it down further. “Nigga I’m FREE! I ain’t gotta fake shit/Muh’fucker I’m me/I’m a real Eastside legend, from juvenile hall to prison/All them thoughts on my mind that done grossed millions.”

The lead single “Talk About It” sounds like Pharcyde’s “Runnin'” if it was turned into an anthem for banging. “Roley on my wrist I just hit/Success is what it represent/Still dressed up like an Eastside Crip/Everywhere I go I’m on my Eastside shit.” He’s not just saying that for the song — the whole video is tinted blue just to represent. That’s neither a positive nor a negative for me, it’s just an indication that it’s important to G to keep his affiliations even though he’s achieved success in the rap game.

“I can talk about comin up from nothin/Made a lot of money but I’m still in the struggle.” That’s the counter balance to what some might otherwise perceive as glorifying the gang life. While G Perico is happy to floss the Rolex watch and the foreign brand cars that he drives, he’s not acting like success was just handed to him. Sometimes he likes to get freaky on tracks like “Fucc On,” talking about what he’d do to a prospective female and vice versa. “I can make it juicy/I can pull the camera out and we can make a movie.” Sometimes he just wants to chill on a mellow instrumental like “Angle” featuring Garren, where he proudly notes “My next steps are gonna be my best steps.” Sometimes he just wants Mike D to lay down a track so he can take the whole crew out for a “Vegas Weekend” and “get fucked up.”

Whatever type of mode he’s in on “FREE” it’s always bolstered by the production and his unique vocals. I saw one bio before this review that described him as “bringing back that 1990’s West coast G-Funk” and I think there’s an element of truth to it. He’s got a HARD accent for a Cali rapper — not hard to understand, but in the way he stresses the vowels in his words. His vocals are somewhere between Suga Free and DJ Quik — a little high pitched and a little bit pimp. G Perico sounds exactly like where he comes from in a good way, but I can also see how that might be too regional for some listeners. For me though I grew up in NO region, with an equal amount of exposure to Texas, California, New York and Florida. I can see why G Perico is succeeding now that he’s a “FREE” man and I look forward to those “next moves” he’s making.