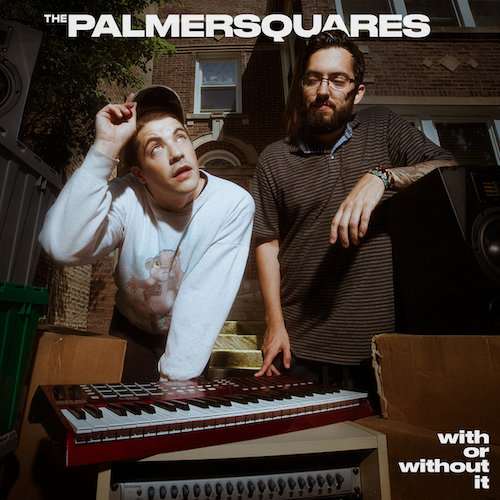 With Or Without It

The Palmer Squares :: With or Without It

It’s time for some deep cuts. Have you heard of Seattle’s Grieves, Los Angeles’s Intuition or perhaps Cali’s Innate & EP? No? Well, check out their coverage across the site.

Back? Now, if you like any of those aforementioned artists and their brand of relatable, often amicable honesty and a knack for crafting a great song, The Palmer Squares will be right up your street. The Chicago duo has been around for a minute, dropping tracks online for over a decade and picking up some traction thanks to performances like this impressive cipher session in 2012:

I could have been listening to too much Grime lately, but Acumental and Term sound very white and very American. That harshness can alienate some listeners, but given both emcees come across as bar-spitters happy to go ham over fiery beats (like “Broken Language”), I owed it to myself to check out The Palmer Squares latest album “With or Without It”.

There’s an easy-going, Sunday afternoon vibe throughout their third full-length project and much of the content follows this breezy backdrop. Smoking, listening to music and reflecting on happier times are all well-worn topics in rap, yet The Palmer Squares manage to make them their own.

“Bottom Line” has a bit of the Macklemore/Ryan Lewis to it; accessible and easy on the ear, although maybe a little too poppy for some readers. There’s a somberness to “Word” that exemplifies The Palmer Squares ethos better than anything – just two laid-back dudes spitting writtens. The verbal jousting continues on “Too Slow” with guest Jerv, where the hook is a reenactment of the age-old hi-five prank.

Production is consistently impressive if a little undercooked. The part of “With or Without It” that stands out most is the duo’s talent for earworms and a willingness to let a song shine more than a verse. “Bad Animals” sticks in the memory with a bold decision to showcase their vocal range, as the rhymes focus on animal metaphors. “When You’re Me” is fucking ill, a trio of verses highlighting Acumental, Term and Joey Cool’s shortcomings with some self-deprecative humor, as Black Buddha Bear croons away in the background.

“Bringing the 90s Back” successfully manages to steer clear of your usual rap nostalgia, instead referencing childhood freedom and innocence via memories of Nerf guns and basement wrestling matches. “Lucky Quarter” is more brash, falling back on their roots and penchant for boastful wordplay.

The Palmer Squares follow a long line of underground emcees from the States that combine a background in lyricism with a warm, playful aesthetic. Some of the songs can feel hollow when they overdo the rhyme schemes, but “With or Without It” is solid throughout, flirting with excellence in a way I’ve not heard in a while. This is well worth tracking down and I look forward to hearing more from these two.

The Palmer Squares :: With or Without It
8Overall Score
Music8
Lyrics8