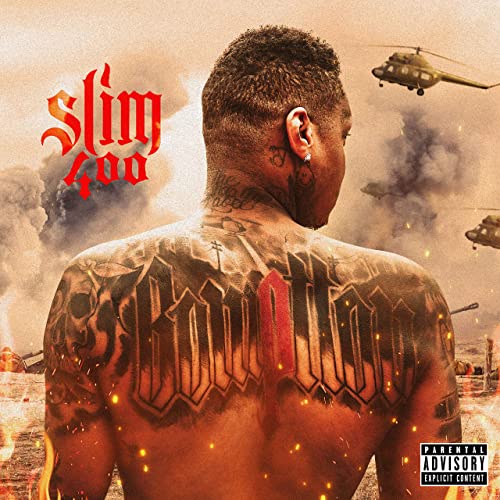 Two things are obvious about Slim 400 without having heard one song from “BompTTon” — he’s a Blood and he’s from Compton. Some Bloods freely replace words that start with “C” with a “B” just to show how much they refuse anything “C” in their life. See fellow Compton rapper YG’s “Still Brazy” as a prominent example of this phenomenon. In fact this is far from a coincidence because YG signed Slim 400 to his record deal. It’s entirely fair to say that without that connection I wouldn’t be talking about or reviewing “BompTTon” right now. If you needed any further evidence of his credentials (you know aside from the fact he was shot nine times and survived) single and video for “Nothing But Bloods” makes everything we just talked about EXPLICITLY BLEAR.

For my fellow sample heads this song uses the same Sexual Harrassment “I Need a Freak” loop done by everyone from Mac Dre to Black Eyed Peas, though my all time favorite is still Snoop Dogg & Suga Free’s “Bring It On” featuring Kokane. Needless to say if you read through the comments section of the video half of the people are throwing up their sets while the other half are praising Slim 400 for using a classic beat. The downside though is that the song is only two minutes long and features a whole plethora of guest stars, so you neither get to enjoy it for very long nor get to know Slim 400 very well. “How I’m Livin” isn’t much longer but perhaps we can glean a little more information from it.

“I only came to get that money, I ain’t come to stay/I’m off that drank, I ain’t even come to play/There’s codeine in my blood, I poured an eighth/How I’m living it could be my last day.” When you’ve already digested more bullets than Curtis Jackson and came out the other side still breathing, that kind of nihilism might be justified. If you thought the only things Slim 400 had to say were about his set or how reckless his lifestyle is though “Police the Enemy” featuring Desert Baby will be a surprise. “Tired of that ho shit/man up, stand up” raps Slim as he gives law enforcement the business for constantly harassing young black men.

You don’t have to be gang affiliated to be stopped and questioned “face down on the ground” and the chorus references George Floyd by saying “I can feel his knee.” It could be a coincidence… but given this album came out in February 2021 over half a year after Derek Chauvin took his life, I strongly believe he meant us to think about it. We should. We should never forget the summer of 2020 nor any of the other black men who have been victimized by the police. Most of the time though Slim 400 is just enjoying life over some straight up funk production, sipping that “Purple Sprite” we all know has more than Sprite in it.

There’s a deep divide on “BompTTon” between how strongly Slim 400 wants to rep for his crew (brew) and how universal his music can otherwise be (ce). Most of the time 400 just wants to rise up and succeed, then enjoy the fruits of the labor he’s spent so long hustling for. He may “tote a pistol for protection” on “I’ll Wait” because “jealousy’s a motherfucker,” but he’d rather not have to deal with the drama. “Remember what my momma told me, make things better.” I feel you 400 but it’s probably not possible if you’ve got people trying that hard to take you out.

If there’s a major downside to Slim 400’s album it’s that the songs are very short and the number of cameos is quite high. Love is love, gang is gang, but if everybody wants Slim 400 to succeed he needs more room to breathe so people can get to know him better. “BompTTon” sounds like he’s on the verge of bigger things, provided that street life doesn’t make him another unfortunate statistic of black on black crime. In my lifetime though the shit has only gotten worse so sadly I’m not counting on him living to an old age.