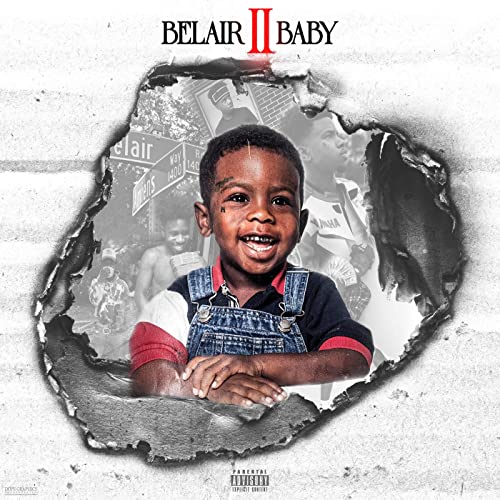 “I got my name from, trapping”

His name isn’t “JFK” though. It’s LBS Kee’vin. On the periphery of rap notoriety, Kee’vin just barely got my attention by doing a song with 42 Dugg, a Detroit rapper I only know because HE did a song with Dej Loaf. You see how far we’re having to stretch the connections here. Unlike the previously mentioned artists Kee’vin doesn’t hail from the D — he’s from Pensacola, Florida. Apparently I missed out on the bidding war for his services when “Boston George” blew up on WorldStarHipHop in 2019. My bad.

After signing with Visionary Records (with distribution through Columbia), Kee’vin followed up on his underground mixtape success with a major label sequel called “Belair Baby 2.” Comparing the songs from then to now it’s clear Kee’vin decided “if it ain’t broke don’t fix it.” He sing-raps his way through tracks about having lots of sex, flashing his wealth, and shooting anybody who threatens his newfound success. He’s “Conceited” and he knows it, and he even gets 2KBABY to co-sign him on it.

“See lately I’ve been having mixed emotions/I don’t know if I miss you, or I miss the sex/but either way I wish you the best.” Those words to open “Mixed Emotions” are as close as he gets to rapping instead of singing, and just as close as he gets to saying anything profound on this sequel album. In my search for something to distinguish LBS Kee’vin from the dozens of AutoTuned artists who sound just like him, I jumped around from track to track and landed on “John Doe.” To give credit where it’s due some of his punchlines are more creative and original than his peers. “If a nigga reaching for my chain, he gon’ need another limb.” That got my attention.

And as far as production, he’s got some solid players like KiloKeys Beatz doing tracks like “Classy Bitch,” which also features a Tier 1 level cameo from Juicy J. Once again some of the punchlines managed to break through the miasma to grab my notice. “I’m so sick and tired of these basic hoes/they don’t know how to fuck me/but I’ll bet you do I’ll put you in the figure four/it look like we wrestling.” WOOOOOOO!

Honestly this leaves me a little confused. The lyrics can be exceptionally crass and misogynistic even by rap standards, and vocal pitch correction makes it hard for Kee’vin to stand out from his contemporaries, but Kilo’s production on tracks like “Lost Files” give Kee’vin just a little bit extra that helps some of his personality shine through. I started “Belair Baby 2” as a complete skeptic but by the end of this album I had warmed up to Kee’vin much more than I expected to. I could even see a track like “Toxic” with Luh kel becoming a Juice WRLD style crossover hit under ideal circumstances.

I’m not here to say that LBS Kee’vin is the next big thing or that Visionary Records was right to win a bidding war to sign him to a record deal. I think it’s far too soon to say any of that. I also think Kee’vin spends too much time hewing to the tropes of his genre rather than trying to innovate and break out of a very formulaic mold. Every once in a while I hear something though that makes me think Kee’vin has a spark, and although I’m not completely sold on him yet, I’d like to see if that ember can be grown into a flame. There’s a chance he’ll be much hotter in the near future… or that ember could grow cold and the fire dies out. Time will tell.