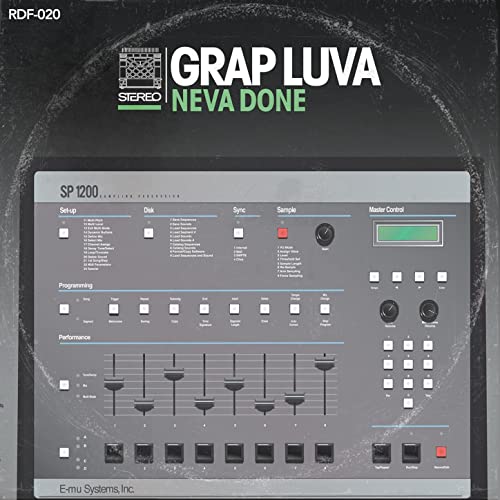 If you were in the right place at the right time for a very brief period in the 1990’s, the prospect of InI’s debut album “Center of Attention” was exciting to you. They were well connected in the hip-hop scene due to rapper Grap Luva being the younger brother of producer Pete Rock, and both he and comrade Rob O had established themselves through cameo appearances on the tracks he produced. With the additions of Marco Polo (soon to be a well regarded producer in his own right) and Ras G the lineup was complete, and the lead single “Fakin’ Jax” had heads nodding theirs in approval.

So what happened? It’s never been clear. Despite the critical acclaim for their lead single and the fact the full album was ready to go, Elektra shelved it and the group disbanded. “Center of Attention” quickly leaked to tape traders and was disseminated through the scene well before file sharing services like Napster existed, and once they DID it was only bootlegged MORE. Pete Rock eventually put an end to this by releasing his own copy of the album, which was only right since Grap Luva was his brother and he did a lot of the production for the group. That seemed to be the end of the story. Another promising rap act fell victim to record label politics and had a career snuffed out before it even began.

That’s not the WHOLE story though. Grap Luva may have been heartbroken by this setback, but he’d “rise from the ashes like the comeback kid” on “Neva Done.” The album was quietly released in 2011 on Redefinition Records — so quietly in fact that we’re only getting around to it a full decade later. It was nostalgia for “Fakin’ Jax” that led me to this release, and I was pleasantly surprised to discover Grap Luva never completely abandoned his dreams. While we’re now found of his Mecca Soul Brother’s occasional verses in hindsight, he was never gifted on the mic like Grap was. “Underrated” is in fact a severe understatement. G.L. was like a more spiritual CL (Smooth) and the bars on “Work It Out” reflect that vibe.

“Walking on blocks where guns clap, watch your back
Young fools packing tools commit criminal acts
That’s all they know, the law of the land is get dough
It gets, pumped in the mind so the mind won’t grow
Yo — and these are the future decision makers
and they’ll become the movers and the shakers
Too many caught up in capers for small paper
Miseducated so the hustle seems greater”

Grap Luva is not judging. “For the ills of the world, you are not at fault” he notes, understanding that poverty and the allure of getting out of it fast is awfully hard to resist. He’s instead giving a gentle push in the other direction with his fluid delivery and thoughtful words, saying “Hey young brothers and sisters, we can make it in this world without falling into all of these traps.” I’m paraphrasing of course but the point is Grap doesn’t come across as bitter or preachy — just concerned with the welfare of the people. It’s as much about how he says it as what he says. For a lot of the album though he says NOTHING, preferring instead to let his production skills on tracks like “Make Em Clap” do the talking.

I would call this an unexpected evolution, but it really shouldn’t be given he put an SP 1200 on the cover, let alone for the fact Pete Rock is his brother. It now leaves us with the conundrum of having to compare the two musically and lyrically. In that regard I can say Grap Luva will always be the superior rapper, but on “Neva Done” he was catching up to his famous sibling quick behind the boards. “Rocking With Elegance” is an ideal description for a song that sounds like head nodding piano jazz. Someday when we haven’t all forgotten what it’s like to gather together in crowded concert halls, this is the kind of music I’d want to hear between sets while getting my drink on.

I came to “Neva Done” expecting to wax poetic about the poetic way Grap Luva flows on the beats, but in the end the production is the real story. “Pieces of a Drum” is the kind of song you’d want to hear somebody rap over, but it stands alone all on its own. “Lion’s Walk” is like a perfect bridge between a Pete Rock and a DJ Premier production, and I’m not sure there’s higher praise I could give an instrumental than that. Maybe it’s the largely instrumental nature of “Neva Done” that kept it obscure for all this time, but these are some beats and rhymes (mostly beats) not to sleep on.