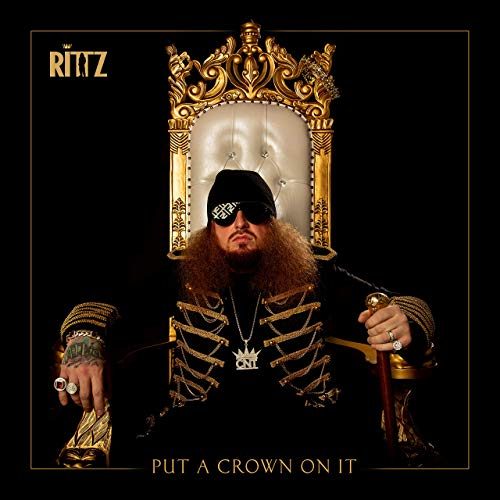 Put a Crown On It

“I don’t battle rap, I smack you with the microphone like sound check”

That’s Jonathan McCollum’s m.o. The rapper better known as Rittz has a career that stretches back to the early 2000’s, but after many years of frustration and failure it was a chance collaboration with Yelawolf that finally took his career to the next level. An explosion of popularity followed along with a deal with Tech N9ne’s Strange Music label. Though the two sides have amicably parted ways with the fulfillment of his contract (which in rap terms just means nobody’s talking shit on The Breakfast Club) it was still odd to me to see “Put a Crown On It” was released on his own imprint CNT Records. More power to him though.

If I was to describe Rittz to the uninitiated, I’d call him a cross between Bubba Sparxxx and Paul Wall. The fact the latter makes a cameo on the song “Feet Up” probably confirms there’s more that a coincidental kinship in style and sound, even though Rittz hails from Georgia and Wall from Texas. Maybe they won’t be cheering for the same schools come bowl season, but then again Rittz probably doesn’t even give a damn about football as he says “I couldn’t tell you who’s in the NFL/A lot of dorks play sports, I don’t dick ride athletes”. The song “Politically Correct” would also draw him a comparison to Marshall Mathers as he’s purposefully saying things just to piss people off for a laugh.

It’s his irreverence which makes Rittz such a charming figure, but tracks like “Twin Lakes” also make it clear that it’s a defense mechanism. “The tears in my face taste like alcohol” croons the rapper as he talks openly about substance abuse and trying to get clean. “If I don’t want to get sober, it’s over/I hope my higher power shows forgiveness”. I’m not sure if he nor any of his fans were ready for this level of honesty from him, but I’m here for it and I support his efforts to make a change for the better.

That doesn’t stop Rittz from going all the way to the other end of the spectrum though on “Paranoid and High” featuring Dizzy Wright. “I did too much by mistake/out the corner of my eye I hallucinate” quips Rittz. Perhaps the songs could be paired together as a warning of what could happen, then a look at what you’ll have to do afterward, but the reality is that Rittz is just a good storyteller even when he’s the victim of the tales that he’s telling. Most of the time though it’s positive and he’s just having fun. “Wake Up Call” featuring Twista and Yelawolf finds the three spitting rapid fire bars, but to the surprise of no one Twista is still the speediest emcee in the game.

More than being fun and irreverent though, songs like “Name Tattoo” featuring Big Hud and Too $hort or “Sound Check” featuring Jelly Roll are something of a throwback in the modern rap era. There’s something honestly refreshing about a rapper with a country drawl who just raps most of the time instead of AutoTune crooning his way across the beats. That’s not to say Rittz can’t sing — he sings the hook of “Sound Check” as well as the entirety of the aforementioned “Twin Lakes”, but he’s in every sense a rapper first and foremost who only adds on to his raps with song rather than using it as a substitute for rapping. Paired with strong production and some laugh out loud punchlines, “Put a Crown On It” stands as a testament to the long road Rittz has been on to become a self-made rapper with his own imprint and creative control over his destiny.