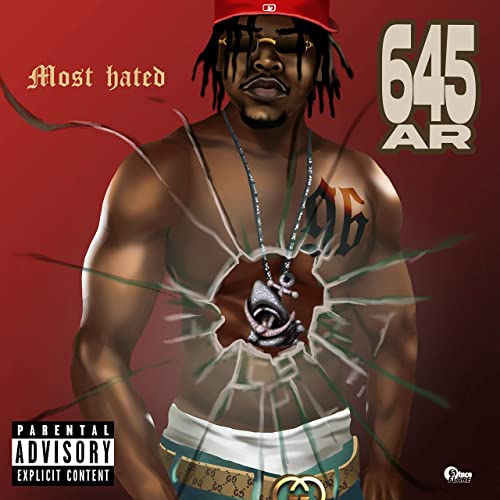 Alvin the Chipmunk met 50 Cent in a teleport pod and their genes got spliced together. The creature that stumbled out of was not recognizable as either of the creatures that went in, so scientists gave it a code name instead: 645AR.

I understand that the trend of recording squeaky, high pitched vocals has become a trend recently. Why? My only reasonable guess is that this global pandemic has all made us a little bit crazy. I never thought any album would be so unlistenable that it made me pine for IceJJFish as a reasonable alternative, but now that “Most Hated” exists I officially have a new low bar.

In my heart I believe there’s something out there for everybody. The video game you think is unplayable is someone’s favorite just because it was the most challenging to complete. The wrestler you think is terrible because they can’t do a single move makes someone laugh every time they get in the ring. Art is subjective, opinions are objective, and someone out there likes 645AR enough for “Most Hated” to exist.

That someone isn’t me. Some terrible rappers have such good production that I can overlook their contributions and focus on the beats. 645AR is unique in that his squeaky AutoTuned delivery is so obnoxious that it completely destroys songs like “Pray.” I feel bad for SenseiATL because without AR on the track, the song might have a chance, but I can’t listen to it more than once without wanting to put on the same headset construction workers wear while using jackhammers. This is noise meant to damage your eardrums. The only saving grace of songs like “Collection of 10” is that they are incredibly short, but even at 1:22 they’re still too long.

I’d like to believe “Most Hated” is some elaborate prank to get people to buy the worst album of all time, but I’ve been down this road before. Artists like MC AK and Scuba Chicken are unironically sincere about their music. They think it’s fantastic no matter how much I or any of the other writers for this site might disagree, and they keep sending us more out of the belief that there’s no such thing as bad publicity. Right now that’s the one thing I can give 645AR credit for — nobody sent this to us. I discovered “Most Hated” all on my own and won’t ever get that 15 minutes of my life back. If you can find some amusement or enjoyment out of it I’m not going to judge you for it. In fact I’ll respect you for being a far better man/woman/person than I am, because there’s no amount of liquor or weed to make it tolerable to me.