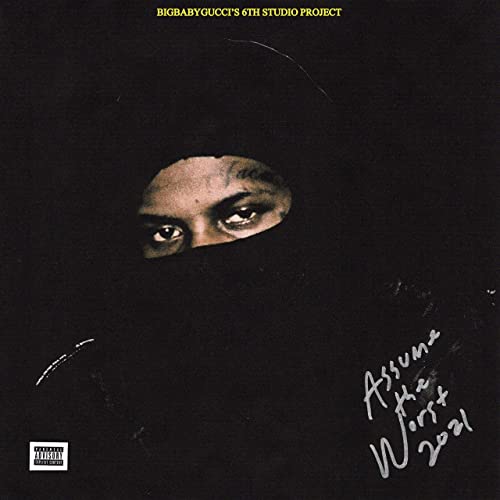 “She said she lovin me, that’s funny be-cause I don’t love myself.”

I’m not 100 on why BIGBABYGUCCI feels the need to print “6th Studio Project” on the cover of “Assume the Worst.” Congratulations on that achievement, but what does that fact even mean? Sixth commercially released album? Sixth time he recorded in a studio including mixtapes? Sixth time he’s ever done a project IN a studio, whether as a soloist or part of a group? The ambiguity may be an attempt to seem cool to prospective buyers, but as your resident skeptic it just raises more questions than answers. The only thing I know for sure about “Assume the Worst” is that there are five projects before this one that I’ve never heard before.

The only information I can find about him (which I’m not even going to link to given it’s most likely self-edited) says he hails from Charlotte, NC and that his first mixtape was called “A Fucking Mixtape.” I don’t really care if BIGBABYGUCCI was so desperate to get noticed that he thought that a title like that was the way to get attention, because apparently it worked well enough to get him a deal with Payday Records. Unfortunately it must not have been a good relationship because he’s listed as a former artist, which at least makes it less likelier to be a self-edit. It would be a pretty weird flex to edit a page just to show who doesn’t want you around, but I can’t consider it beyond the realm of possibility someone would do it just to ensure their name comes up in a Google search. I admit that in that case it’d be at least slightly clever, because what editor is going to care about doing a deep dive to prove or disprove a small artist was signed to a small imprint?

If at this point you’re wondering why this review has spent more time figuring out who BIGBABYGUCCI is than talking about the music on “Assume the Worst” I’m about to drop the bomb — there’s not that much to say about it. Aside from an interesting outro on “Black Wall Street” that paints conspicuous consumption as a form of modern day slavery, certainly a premise worthy of a college thesis, the album and its rapper have little to say. I’m not inclined to seek out the previous five projects on the basis of what’s available here. BIGBABYGUCCI manages to fulfill all the tropes of the 2020’s rap artist in one gone — his songs are short (all under three minutes), his vocals are excessively pitch corrected, and he’s not afraid to resort to violence to handle any situation where he feels threatened or disrespected.

The most compelling thing about “Assume the Worst” is that a few of the tracks have nice production. The mononymous producer Fish caught my ear with “Language,” a track with rumbling bass, dirty synths and a hint of chiptune influence that I’d enjoy more as an instrumental. He also does the closer “Bleed Thru” and the in between tracks “20 On a Necklace” and “Bloody Murder Elegance,” the former being superior to the latter. If this was a demo for Fish’s work I’d say he passed the test, but it’s a shame his artist is largely forgettable. I don’t automatically disregard a rapper for being a carbon copy of Juice WRLD or XXXTentacion (may they both rest in peace), but if you’re going to use the same sound and style as them at least try to bring something innovative or compelling to the table lyrically. I regret to say that six studio albums in BIGBABYGUCCI isn’t very interesting.